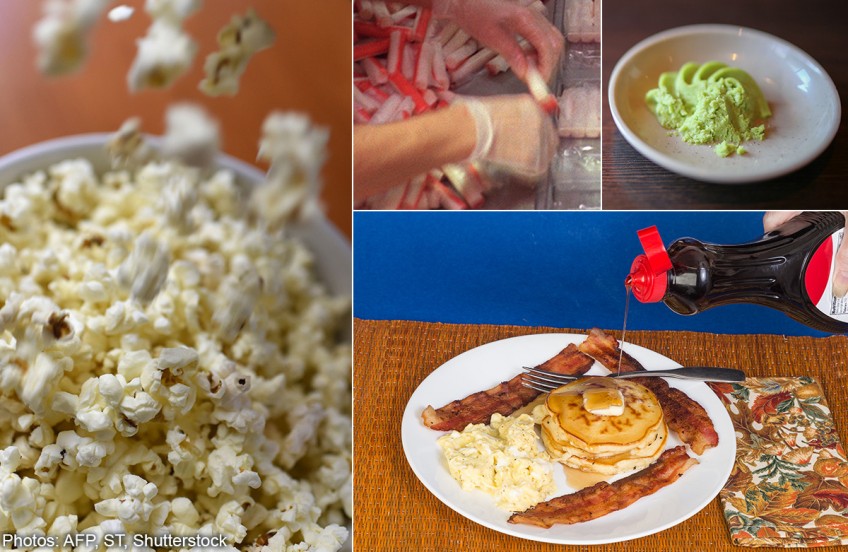 Wasabi, or Japanese horseradish, is a prized rhizome costing around US$75 (S$100) per pound. It is also a highly perishable and commonly faked product.

According to lifestyle magazine Complex's food site First We Feast, the wasabi you've been eating could indeed be horseradish, a different plant altogether.

The wasabi, which comes from grating the root of Wasabia Japonica, served in many restaurants outside of Japan is really a mixture of horseradish, mustard and green dye, The Huffington Post reported last March.

Even within Japan, some restaurants use a combination of horseradish and wasabi, if they have any, due to high demand for the real thing which is usually grated to order, First We Feast said.

While we're on the topic of Japanese restaurants, the crab in your California roll is most likely a pulverised concoction of whitefish, egg whites, wheat starch, and hydrolysed soy protein.

Check out First We Feast's list of 10 fake foods you're probably eating for more bleak revelations.

In 2013, an episode on This American Life explored the rumour that pig rectums were being passed off as squids, and none of the radio show's producers could tell the difference between the two after they were breaded and fried.

Fortunately, First We Feast said that there were no reports of fake calamari being sold in the US.

"So unless you're eating really cheap calamari somewhere outside the US, you can probably rest easy," First We Feast added. How reassuring for those of us here in Singapore.

The California roll you get at the average sushi joint contains avocado, cucumber, sesame, and crab... sticks, which actually have no traces of the crustaceans.

The imitation meat is made using whitefish, egg whites, wheat starch, and hydrolysed soy protein. It's then shaped into sticks and dyed on the exterior to look like the meat of crab legs, First We Feast said.

With the real deal costing around US$75 (S$100) per pound, it's not hard to figure out why Japanese restaurants choose to pass off a mixture of horseradish, mustard, and green dye as wasabi.

Here's how to tell you've been eating horseradish all this while: wasabi is hot but doesn't have a burning aftertaste that lingers, The Huffington Post said.

The news site added that the horseradish paste is harsher and that it doesn't taste as fresh as wasabi, which has a smoother, cleaner, and more herbal flavour as compared to its cheaper substitute.

The truffle oil in your truffle fries is most likely made with the chemical 2,4-dithiapentane, a lab-synthesised replication of one of the hundreds of compounds that give real truffles their exquisite aroma.

"Or, if they really take you for a fool, olive tapenade will do the trick," First We Feast said.

Real maple syrup is made almost entirely from the sap of a maple tree. It is harvested seasonally and follows a strict colour-based grading scale, First We Feast said.

It is also more expensive than its substitutes such as "maple-flavoured syrups" and "pancake syrups", which don't contain anything close to maple. They're usually made using high fructose corn syrup, cellulose gum, and artificial flavours, among other ingredients.

A study by an ocean preservation organisation in 2013 found that the controversial fish escolar was being passed off as white tuna 84 per cent of the time.

White tuna is supposed to have a light colour and mild-flavoured flesh, First We Feast said. If you must get your hands on the prized fish, it recommends that you "buy direct, ask lots of questions, and consume at your own risk".

The whipped cream on your cake is most likely neither whipped nor cream.

Rather, the fluffy white product is made using hydrogenated vegetable oil, corn syrup, xanthan and guar gums, and artificial flavours.

How do you make fake blueberries? By using dextrose, palm kernel oil, flour, citric acid, cellulose gum, maltodextrin, and artificial flavours and colours - blue and red (which gives you purple).

The buttery topping on your popcorn is made using hydrogenated soybean and coconut oils, blended with diacetyl and beta carotene for flavour and colour, according to First We Feast.

It could also contain gluten.

Products that don't contain cocoa butter are prohibited by the US' Food and Drug Administration from being called milk chocolate. So chocolate-coated candies such as Milk Duds, Mr. Goodbar, and Whatchamacallit are now referred to as chocolate candy after The Hershey Company decided to replace cocoa butter with cheaper oil substitutes in 2008.