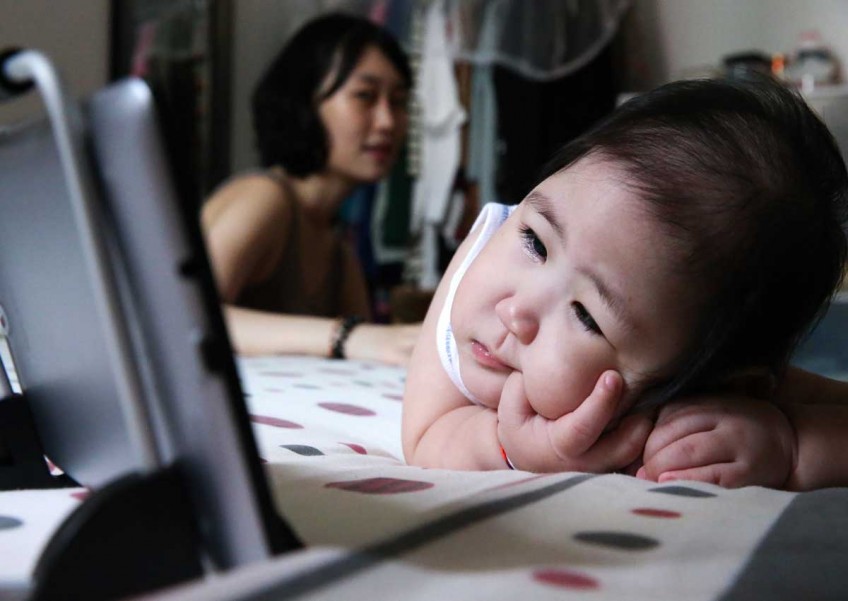 Last November, a young girl showed up at Madam Jamie Chua's flat to offer up her piggy bank.

The girl, who was accompanied by her mother, told Madam Chua that she would like Madam Chua and her family to have it because she believed they needed it more than her.

Such surprise visits and unexpected acts of kindness have become quite a frequent occurrence for Madam Chua, 30, and her husband, Mr Xie Wen Long, 40.

Yujia, who is two years old now, was born with oesophageal atresia, a rare birth defect in which a baby is born without part of the oesophagus, leaving a gap between it and the stomach. As a result, she cannot eat through her mouth.

The couple set out to raise $2 million - the estimated sum needed to take Yujia to Boston Children's Hospital for an operation. They picked the hospital based on their research into their daughter's illness.

The amount raised so far is close to $1.1 million, which amazes the couple whose decision to crowdfund drew some flak.

One of their uncles was so taken aback by their crowdfunding campaigns that his negative reaction resulted in some unhappiness within the family.

"He thought we were crazy as the amount we needed to raise was really high," said Madam Chua.

"My mum, being very sensitive, was rather angry with him."

Yujia's plight appeared in several media outlets and the family often gets stopped by strangers who want to say "hello" or to cheer for them.

"For some reason, we are very 'popular' in Tampines," said Madam Chua who quit her job as an IT executive to look after Yujia.

She added that strangers they met during Yujia's many hospital stays have also reached out to them.

"A woman wrote to say she felt embarrassed after reading about our situation because it made what her son was going through seem minor," said Madam Chua.

For the couple, learning to count their blessings has kept them going.

They have seen children die and heard of couples breaking up because of an ill child. But they keep reminding themselves that Yujia's case is not without hope. "At least we know there is a possible solution and one with proven success," said Madam Chua.

"As a Buddhist, I believe that Yujia is fated to be my daughter."

There are ups and downs for the family.

They celebrate Yujia's little achievements: simple things like progress with her psychomotor skills, when she claps along to her singing or when she manages to sit up correctly.

On bad days, Yujia yanks at her own hair in frustration, repeatedly gags on her own saliva or has to be rushed to hospital.

For the sake of their daughter, the couple try to stay strong. In Madam Chua's words, "There's no time to complain."

With more than half of the medical fee raised, Madam Chua finally has reason to think about the eventual trip and the additional headaches that will come with it, such as money for the air tickets and their six- month stay in Boston.

"Frankly, we didn't think that far back then because the amount we are trying to raise is a lot," she said.

Mr Xie, a freelance event organiser, said: "We also don't want people to think that we only know how to ask for donations."

If possible, the family want to take care of their own expenses because they already feel indebted to strangers who have given money, as well as other necessities such as diapers, catheters and an air purifier.

With about $900,000 more to raise, Madam Chua is thinking of making soaps or souvenirs to sell, but many people have advised her to spend her time looking after her daughter instead.

Mr Xie, who used to have a full-time job until his constant need to take time off work displeased his former employer, is now the sole breadwinner.

Despite the difficulties, the couple are determined to find the money for the operation.

"A lot of people have asked if I would give up," said Madam Chua.

The writers are Singaporean documentary photographers who believe in the power of using their visual storytelling skills to help others. After meeting Yujia and her family last month, the duo decided to help the family by spreading their story.

Find out how you can help

*Scape will be working with photographers Tay Kay Chin and Bernice Wong in telling baby Yujia's story and her need for medical attention.

Miss Wong said: "I used to be a typical youth who cared only about myself.

"But using photography to work on passion projects like this has changed my life indelibly.

"It's easy to think that I am helping others, but it is I who have so much more to learn from everyone else instead.

"I hope I can share what I do and plant this idea that everyone can make a difference."

On partnering with Mr Tay and Miss Wong, *Scape's executive director Christopher Pragasam said: "We support youth like Bernice by providing avenues for like-minded individuals to come together to further their cause.

"There are programmes to enable them to develop their capabilities as well as networks to connect them to mentors.

"Our mission at *Scape is to seed and grow a culture of youth activism in Singapore."

*Scape will host a special dialogue session with Miss Wong and Mr Tay as well as Madam Jamie Chua in sharing her daughter's story and how others can help.

Register for the dialogue session at savingbabyyujia.peatix.com/view

This article was first published on February 1, 2016.
Get The New Paper for more stories.