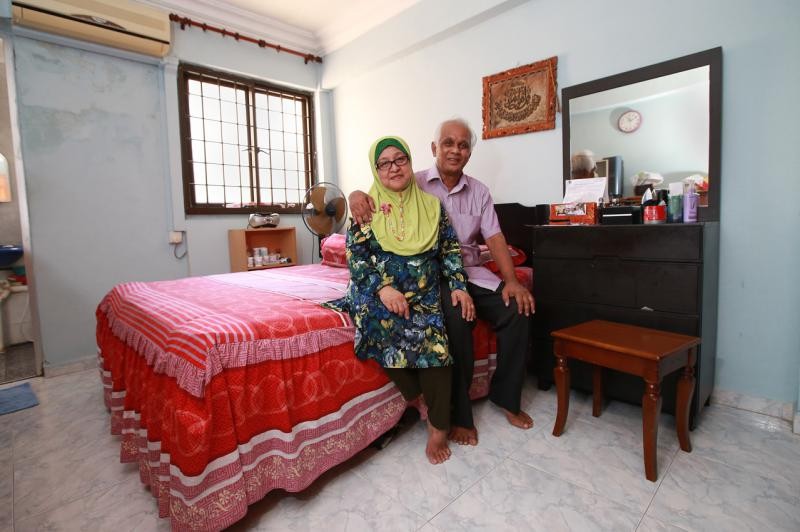 After learning that his work contract would not be renewed next year, 68-year-old security officer Abdul Rahman Kemat and his wife decided to sell part of the lease on their four-room flat to gain some passive income.

The couple, who had 81 years left on their lease, sold 46 years back to the Housing Board for about $144,000 earlier this year.

Of this sum, about $119,000 went towards buying Central Provident Fund Life plans, which provide the couple with a combined monthly payout of $1,000.

"It will be difficult for me to find a new job at my age," said Mr Abdul Rahman who lives in Jurong West. "We wanted to do this so that we could get a steady monthly allowance."

His 64-year-old wife Samah Saat works as a school canteen helper, earning about $50 a day.

The couple are one of 1,506 households who have taken up the HDB's Lease Buyback Scheme since it was introduced in March 2009. The scheme lets elderly flat owners sell part of their lease back to the HDB for retirement income.

It has been updated several times, including in April last year, when it was expanded to include four-room flats.

This allowed the scheme to cover three-quarters of elderly HDB households, compared with 35 per cent previously.

In addition, flat owners can now choose the length of lease to be retained, from 15 to 35 years, as long as it covers the youngest owner until the age of 95.

Previously, the only option was to retain 30 years of the lease.

Some 541 households took up the scheme between April last year and March this year.

Of these, 233 households live in four-room flats.

Nearly half, or 261 households, chose to retain a lease length other than 30 years.

It takes about three months to complete an application for the scheme.

It includes financial counselling to ensure that the applicants make an informed decision, the HDB said.