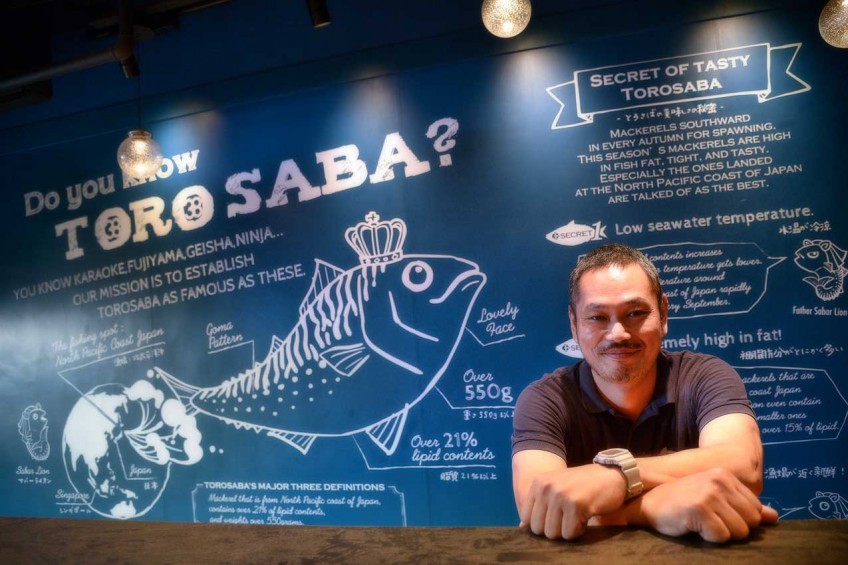 Japanese food lovers, the wait is almost over.

By next Saturday, 12 of the 16 brands at the new Japan Food Town in Wisma Atria will open to the public. These include Dassai sake's first pop-up bar outside Japan, saba-centric restaurant Sabar and fruit shop Bar Nippon, selling seasonal produce from Japan as well as smoothies and fruit-based cocktails.

At the end of this month, Anzu restaurant, which features Kyushu produce, and Shabu Shabu Tajimaya, serving authentic shabu shabu and sukiyaki, will open. Yakiniku Heijyeon, known for its quality wagyu, will open next month.

The 20,075 sq ft Japanese food hall is located on the fourth floor of Wisma Atria, the same level as the Food Republic food court.

Each brand in Japan Food Town has its own dining space, with a total seating capacity of 628 people. There will also be events and special food fairs organised in the space occasionally.

Out of the 16 brands, only one - Hokkaido Izakaya which features Hokkaido cuisine and ingredients - already has a branch in Singapore in Tanjong Pagar Road.

The rest are opening in Singapore for the first time. The tenants whom The Straits Times met on Tuesday are excited about their new ventures and are busy putting the final touches to their restaurant spaces and menus.

Committed to developing the Machida Shoten ramen brand in Singapore, its managing director Kiyoyuki Miyashita, 35, will be based here permanently. The eight-year-old chain has 36 outlets in Japan and supplies ramen to many restaurants.

Mr Miyashita says in Japanese via a translator: "It is good to come to Singapore as it is the cosmopolitan hub of Asia. Once this outlet is successful, I hope to open five more here." He is also likely to open in New York and Los Angeles by the end of this year.

For now, the ramen served here will be brought in from Machida Shoten's factory in Japan, but he does not rule out opening a factory here.

To showcase the brand's journey to Singapore, Machida Shoten has a specially drawn mural with local elements that include Singapore's iconic Merlion.

This is similar to Sabar restaurant's caricature of the Merlion on its menu, called the Sabar Lion. It is a saba fish dressed in a Merlion costume. The star ingredient in the restaurant is the saba fish or mackerel.

Popular items in Japan's Sabar menu which are available here include the saba sashimi and toro-saba-zuke bowl, where the saba is marinated in soya sauce and dashi is added towards the end of the meal to mix with the rice.

On choosing to open in Singapore, Sabar's managing director Okada Ryo, 45, says: "I love Singapore and it is the centre of Asia. We want people here to try our saba, it will be something different for them to enjoy."

He has plans to open three more outlets in Singapore.

For the popular Dassai sake brand, its first pop-up bar here will run for six months. Whether it continues operations after that will depend on the response.

Dassai's bar manager Angelia Siang, 49, says: "Diners here are more educated and this is a good place to test out the market."

The $8.5-million Japan Food Town is a joint venture between the Cool Japan Fund and Japan Association of Overseas Promotion for Food & Restaurants. The fund, which is backed by the Japanese government, supports projects that promote Japanese products and culture overseas.

Saba, or mackerel, is the star ingredient at Sabar.

The brand started in 2014 in Osaka and has 12 outlets in Japan. Its magic number is 38, as it sounds like saba in Japanese. So, the number is not only featured in the logo, but it is also the number of seats and dishes available, as well as the length of the saba served - 38cm.

Top-quality saba from the Aomori prefecture is brought in twice a month, says its managing director Okada Ryo, 45.

The dinner menu has a wider selection, including dishes specially created for Singapore. These include chilli toro-saba ($30), which is deep-fried toro-saba with a spicy chilli sauce; and paper toro-saba ($6 for three pieces), which is a spin on the Chinese-style paper-wrapped chicken dish. Here, the saba is flavoured with oyster sauce, Shaoxing wine and Japanese spices, and cooked in paper.

No Japan food hall is complete without a ramen shop. Machida Shoten from Kanagawa prefecture specialises in Iekei ramen, which directly translates to "house-type" from its kanji characters. This means that noodles are cooked to diners' preferences, just like how one's mother might cook it at home.

The slightly thick and flat Yokohama-style yellow noodles come in a robust tonkotsu and shoyu stock, with spicy miso and shio options. To complete the meal, a bowl of rice is served to mop up the remaining soup.

In keeping with the brand's reputation for having a cheerful and fun atmosphere, its managing director Kiyoyuki Miyashita, 35, says, staff will applaud diners who finish everything in their bowl.

The ramen (from $13 a bowl) comes in customised bowls and the disposable chopsticks have special sleeves with one's fortune printed inside.

Other items on the menu include house-made gyozas, which come in flavours such as shiso and coriander, as well as a selection of appetisers created just for the Singapore outlet.

The first brand to open tomorrow at Japan Food Town, it is run by graduates of the Tokyo Sushi Academy, Japan's top traditional culinary institution which has a local branch at Chinatown Point. The restaurant specialises in tempura and donburi.

The 28-year-old sushi restaurant in the famous Tsukiji market is known for its sushi made with the freshest, seasonal produce.

For Singapore, chef Eisaku Kawashima, 34, has created a selection of sushi - chutoro (slightly fatty tuna) with soya sauce jelly; Kinmemai rice topped with ikura (salmon roe) and an avocado-wrapped sushi topped with salmon, mayonnaise, cream cheese, soya sauce jelly and ice plant. The soya sauce jelly created for the select sushi items ensures that the perfect amount of soya sauce is paired with the ingredients. Prices start at $13 for an eight-piece sushi set, together with miso soup, chawanmushi and dessert.

This is the first pop-up bar outside Japan for the popular sake brand, known for its premium junmai daiginjo sake. It is from the Asahi Shuzo brewery in Iwakuni, Yamaguchi prefecture.

Exclusively available at the outlet is the Dassai 23 Centrifuge - where a special centrifuge machine separates the completed sake from its lees. This results in a fine sake with a "cleaner" finish, says its bar manager Angelia Siang.

Another highlight is the premium Dassai Beyond, as well as sake cocktail Sakura Sling (also available at Raffles Hotel's Long Bar) and sparkling sake. A small food menu will also be introduced, featuring a Dassai cheesecake made with the sake. The bar also retails sake by the bottle. A Dassai sake tasting set of three 20ml junmai daiginjo costs $20.

For those who do not fancy ramen or udon, get the freshest soba made on-site at this soba-centric restaurant. Its soba stand in Tokyo draws long queues daily for soba bowls topped with vegetable tempura. Prices start at $10.80 for kake soba.

This article was first published on July 07, 2016.
Get a copy of The Straits Times or go to straitstimes.com for more stories.