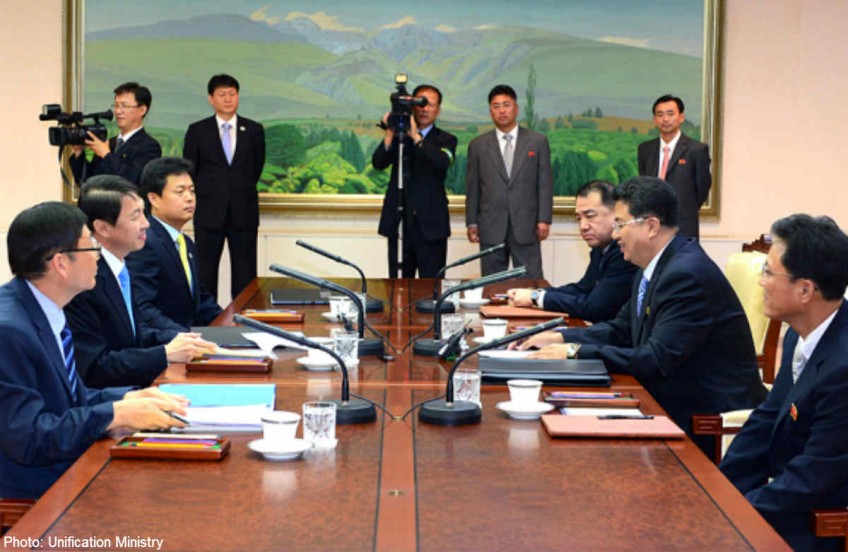 Delegates from South and North Korea meet at the truce village of Panmunjeom on Thursday.

The two Koreas held a meeting Thursday to discuss the envisioned participation by North Korean athletes and cheerleaders in the upcoming Asian Games in Incheon.

A three-member delegation from each side opened the talks at about 10:15 a.m. at Freedom House on the southern part of the truce village of Panmunjeom. It was led by Kwon Kyung-sang, secretary-general of the games' organizing committee, and Son Kwang-ho, vice chairman of the North's Olympic Committee.

The negotiations were the first sports-related gathering since the sides met in February 2008 over joint cheering during the Beijing Olympics. The dialogue is in line with their agreement Monday, four days after Pyongyang made a proposal via a cross-border telephone line.

"This meeting is for consultations over working-level issues associated with the partaking by North Korean players and cheerers in the Asian Games," Kwon told reporters before departing for the border town.

"I will engage in the talks with a calm and diligent attitude so that we host the games successfully."

At the talks, the sides were likely to focus on the North Korean team's scale, lodging, transportation and other accommodations during their stay.

With Pyongyang stepping up its peace offensive, it may have also proposed a joint entrance, sharing the cheering section or even a unified team for some of the matches.

The communist country last week released its plans to dispatch a cheering squad to the quadrennial event, which will kick off on Sept. 19 for a two-week run. It unveiled a plan to send 150 athletes to the competition in May but has recently expressed its willingness to add more, Seoul officials say.

The North was expected to request financial support from the South for the rare trip. Seoul covered the impoverished neighbor's expenses incurred during the 2002 Busan Asian Games, the 2003 Daegu Summer Universiade and the 2005 Incheon Asian Athletics Championships.

But the Unification Ministry has expressed skepticism, though it apparently left open the possibility of shouldering part of the costs. It also remains doubtful about a unified team and joint cheering given the lack of preparation time.

"Our current stance is that any support (for North Koreans) will be in keeping with the regulations of the games that participating athletes should pay for their stay, albeit partially, though it will be virtually difficult to apply (the rules) as strictly to them as we do to other countries," a senior ministry official told reports on condition of anonymity.

"Back then, I guess there was an understanding that we should accommodate them."