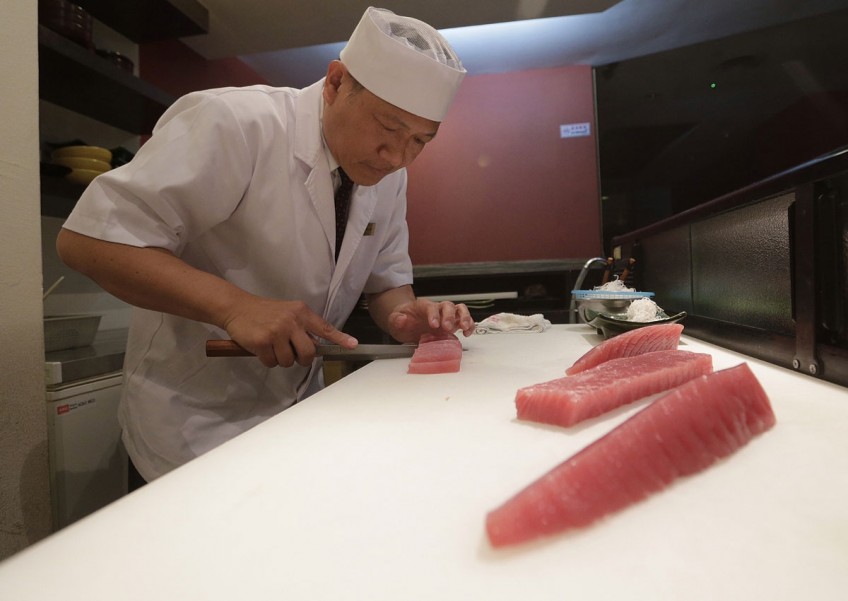 Bluefin tuna will be taken off the menu at Hinoki Japanese Dining for three weeks next month in an effort by the restaurant to be more environmentally sustainable.

The eatery is one of 44 to have pledged to stop serving overfished species and introduce sustainable seafood dishes for the Responsible Seafood Festival - a World Wide Fund for Nature (WWF) event that runs from Oct 3 to 25.

Its owner, Mr Kevin Cheong, has been serving bluefin tuna sashimi and belly dishes since the restaurant opened in the Central Business District five years ago.

"It's our star item," said Mr Cheong, who explained that the fish's oil content is high and its meat firmer than other tuna varieties. "We have never used any other tuna besides bluefin; the colour and taste are all wrong."

The 46-year-old reckons that most Japanese restaurants here offer the fish, but he decided to be part of the festival because he wanted to do his part for the environment. His restaurant will also stop serving its ad hoc speciality abalone, whale and shark's fin dishes during the festival. Instead, it will offer a sustainable seafood multi-course omakase meal - a Japanese concept in which diners let the chef decide what they will have.

"Commercially, it might be a way for us to differentiate ourselves from other restaurants," he said.

The festival will also be a trial to see if the move to sustainable seafood can be made permanent.

Singapore consumes an average of 100,000 tonnes of seafood a year. An estimated 20 per cent of this comprise 19 types of fish from the WWF's "red list" of overfished species, including the flowery grouper, which is common on Chinese restaurant menus here.

Mr John Tanzer, director of the WWF International's Global Marine Programme, told The Straits Times that these fish often end up in high-end restaurants. "The more rare something becomes, the more expensive it becomes, and the more incentive there is for someone to catch it," he explained. "We cannot continue the way we have been going. We are going to rob future generations of their food supply and healthy oceans."

The problem of overfishing is not unique to Singapore. According to the WWF, by 2048, the world's oceans will no longer be able to provide people with seafood. Figures from the Food and Agriculture Organisation of the United Nations show that over 90 per cent of global fish stocks are overfished and 6 per cent are depleted.

Mr Tanzer said that the festival will help the WWF to get its message across to the retail trade and consumers here. "People eat out a lot. If we can help them understand the concept of sustainable consumption and, hopefully, influence the choices they make, that would be useful," he said.

Cost, however, can be a stumbling block for some businesses. Sustainably caught crabs, for instance, can cost 15 per cent more than non-certified ones. There is also a question mark over whether customers will take the bait.

Engineer Yeo Min, 31, is unlikely to change her eating habits. She said: "It is really difficult to change mindsets and one fewer consumer won't make a difference... I cannot even finish one whole fish by myself during mealtimes."

This article was first published on September 17, 2015.
Get a copy of The Straits Times or go to straitstimes.com for more stories.