60 to be picked for new Singapore sports scheme 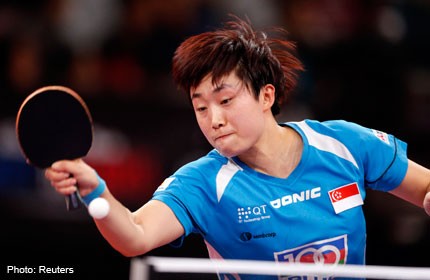 The new scheme will enhance the development of elite athletes such as paddler Feng Tianwei (Above).

SINGAPORE - A new phase in the development of Singapore's elite athletes will kick off in September.

Around 60 athletes will work in tailor-made programmes under the Sports Excellence Scholarship of the country's new High Performance System (HPS), which the Government announced earlier this year.

The spexScholarship will be armed with a $40 million war chest, spread over five years.

In a briefing at the Ministry of Culture, Community and Youth (MCCY) headquarters on Tuesday, Minister of State for Trade and Industry, Teo Ser Luck, revealed that 218 nominations from 28 sports were submitted by the May deadline.

Their role includes a review of the nominated athletes, eventually submitting the candidates they deem worthy of the scholarship to the HPS Steering Committee, which is chaired by MCCY Acting Minister Lawrence Wong.

The new system is the successor of previous elite athlete support programmes Project 0812 and the Olympic Pathway Programme (OPP).

The HPS also supplements the support an athlete receives from the Singapore Sports Council's carding system, and from their respective national sports associations (NSAs).

Said Mr Teo: "We hope that the athletes have the track record that reflects the potential for podium finishes at least at major Games.

"I hope these athletes are good role models... and can inspire a younger generation to do sports."

He stressed the inclusiveness of the new programme - both able-bodied and disabled athletes are considered on equal footing, and athletes from Olympic sports and non-Olympic ones, like silat, will be selected on the same terms.

The 218 nominated athletes have been interviewed and Mr Teo's committee is monitoring their performances.

After receiving their recommendations, the steering committee will decide on the final list and the programme will commence in September.

The Singapore Sports Institute (SSI) will work with the particular athlete and his or her NSA to tailor a programme - including coaching, sports science and sports medicine - that will give the individual the best possible chance to succeed.

Both Mr Teo and SSI executive director Fabian Lim stressed that the new scholarship for the nation's top athletes encompasses more than just excelling in a particular competition, nor is it limited to the sports arena.

Associate Professor Lim said: "It is a long-term development concept... we are working with the NSAs in developing a pipeline because it takes more than one Olympic cycle to develop an Olympic-class athlete.

"The support will continue as long as the athletes are performing and progressing along this pathway... and when their sporting life comes to an end, we will ease them back into the workplace and society."

He estimated that between 10 per cent and 30 per cent of the $40 million will come in the form of direct funding to the athletes, via their NSAs.

The selected athletes will also be taught life skills like financial and life planning and resume writing, with the SSI formalising programmes to match the athletes to sports-friendly companies.

The athletes are expected to place training and competitions as their main priority, and juggle with work or study commitments via flexible arrangements.

They are expected to take on a full-time athlete's training load, with their competition results closely monitored for progress.

Consistent below-par performances, along with poor attitude and/or behaviour, may see the athlete axed.

The SSI will form Functional Sport Programmes in each of the sports involved, and it will involve a high-performance manager, coaches, an NSA representative and sports science and medicine personnel.

Mr Teo said: "MCCY has been very clear from the start that for sports, it's to bond the nation and for people to come together regardless of their background.

"Hopefully, (the recipients) can inspire the nation in what they are doing in their journey towards becoming champions."