#65thMissUniverse Coronation Event Sparked a Global Conversation on Twitter with Over 34.6 Million Tweets

SINGAPORE - Media OutReach - 1 February 2017 - After the momentous win of Pia Alonzo Wurtzbach (@PiaWurztbach ) at 2015 Miss Universe, the pageant kicked off this year to great fanfare. Hosted by none other than Steve Harvey (@IAmSteveHarvey ), the 2016 Miss Universe coronation event was held at SM Mall of Asia in the Philippines. People from all over the world had their eyes glued to Twitter to see what happened at the #65thMissUniverse event.

From the contestants' beautiful gowns to the unique national costumes; fans all over the world turned to Twitter and lit up Twittersphere. There were more than 34.6 million-related Tweets exchanged during the coronation event - the highest Tweet volume for an entertainment event during the live show .

But more than anything, it was Iris Mittenaere ( @IrisMittenaereO ) who was ultimately crowned #65thMissUniverse . This young beauty from France is pursuing dentistry and enjoys cooking. 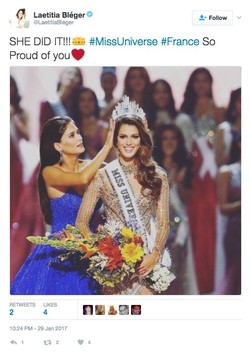 Here are the contestants who were most Tweeted about during the coronation event: 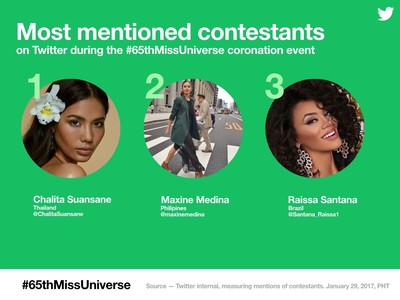 Below are the most talked-about moments during the live coronation event: 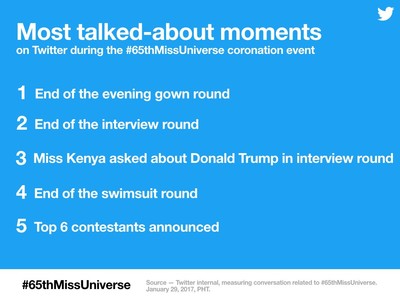 The event also marked the final walk of @PiaWurztbach , crown holder of 2015 Miss Universe, on stage. Filipinos shared their thoughtful messages on Twitter, thanking Pia for bringing honor and pride to the Philippines. 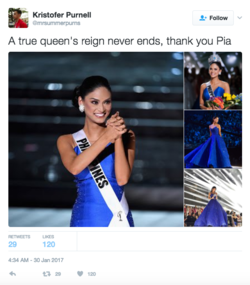 Filipinos also Tweeted out their big support to this year's contestant from the Philippines, Maxine Medina ( @maxinemedina ), even though her journey ended in the Top 6 round of the pageant. 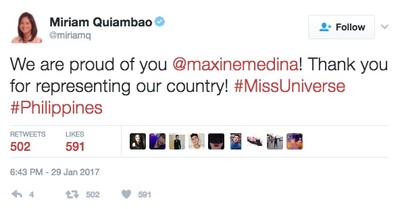 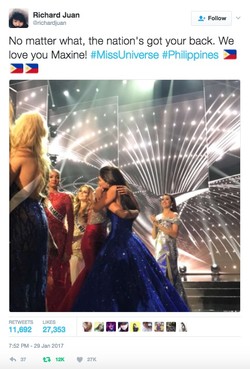 Many local and international personalities also shared their thoughts and opinions about the result of the Miss Universe pageant. More Tweets can also be seen in this Twitter Moments: https://twitter.com/i/moments/825598159409647616 . 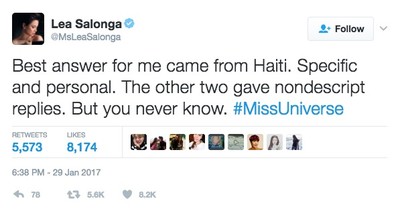 Twitter, Inc. (NYSE: TWTR) is what's happening in the world right now. From breaking news and entertainment to sports and politics, from big events to everyday interests. If it's happening anywhere, it's happening first on Twitter. Twitter is where the full story unfolds with all the live commentary and where live events come to life unlike anywhere else. Twitter is available in more than 40 languages around the world. The service can be accessed at Twitter.com , on a variety of mobile devices and via SMS. For more information, visit about.twitter.com or follow @twitter and @TwitterPH .