Acer Iconia B1: Your tablet must-have 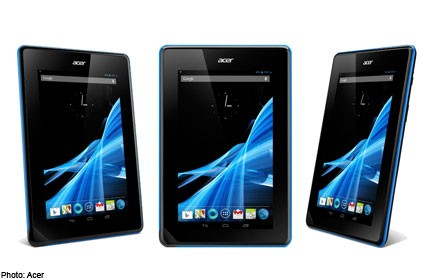 Tablets are all the rage these days. Whether it is for work, education or leisure, tablets have found their way into many hands.

It seems everybody wants one for learning, for productivity, for social media, for their entertainment needs, or even simply for reading and casual browsing.

It's no surprise that tablets appeal to a wide audience because of their highly portable form, ease-of-use and lower price point over laptop computers.

The tablet market is huge, and there's certainly a wide range of tablets to meet different budgets of the consumers in Brunei.

The iPad is certainly covering the mid-range to premium territory, with prices starting somewhere above the $400 mark to over $1,000 towards the high end of the scale. The prices vary with the amount of memory and the internet connectivity options (Wi-Fi or 4G) that come with the iPad.

And then there are the mid-range models dominated by Android.

For just under $400, you can pick up a base 7-inch tablet from Samsung or Huawei. These are very popular with consumers here as many have ditched their smartphones for the tablets as their primary communication device.

But what if you do not have that amount of money but still want a tablet?

Tablets sold at budget prices below $300 often come with a lot of compromise.

Many of them run on outdated software, mediocre hardware specifications and less durable build, manufactured by brands that are probably unheard of.

Thankfully, Taiwanese brand Acer has been listening to the unhappy budget consumers and recently released one of the most affordable 7-inch tablets on the market that does not compromise on quality.

The Iconia B1 gets you a tablet running on the latest version of Google's Android operating system (OS) dubbed Jellybean (4.1), a solid dual-core 1.2GHz processor and 16GB of memory. All these for just $198.

At $198, it is quite a steal for a tablet running on Jellybean.

It's an excellent price point especially for students and parents who want to purchase multiple tablets for their children's educational needs.

While there are other tablets on sale at similar prices, you can never be assured of their quality.

If price and quality are important to you, brands like Acer are definitely where you should be looking at.

Acer has been on the tablet market for quite some time with its Iconia line, but this year it is looking to get into the tablet price-war with other high quality budget devices such as the Google Nexus 7 and the Amazon Kindle Fire.

Even for its low price, the Iconia B1 delivers the same tablet experience across other similar tablets running Android Jellybean OS.

You have access to all the 700,000 apps from the Google Play Store, can store your media files, and even root the device if you're up for it.

Of course, with a 1.2GHz processor and 512MB RAM, performance isn't really quite up there with the premium tablets yet if blazing fast and buttery smooth experience is what you're after.

But if most of the things you do aren't too power intensive, such as reading ebooks, surfing the web, checking email, listening to music and watching movies, the Iconia B1 handles those tasks well.

It's really not bad at all.

Tablets, especially the ones powered by Android, have reached a point where they have become good enough.

This is all thanks to Google's latest Jellybean OS, which has enhanced and simplified the tablet experience after the nightmare that was Honeycomb.

Acer is smart to include pure Android Jellybean experience on the Iconia B1, with no proprietary skins and bloatware to get in the way of first-time Android tablet users.

Once again, at just $198, it is too hard to ignore. You could just pick one up today and start using it, right now, after you read this article.