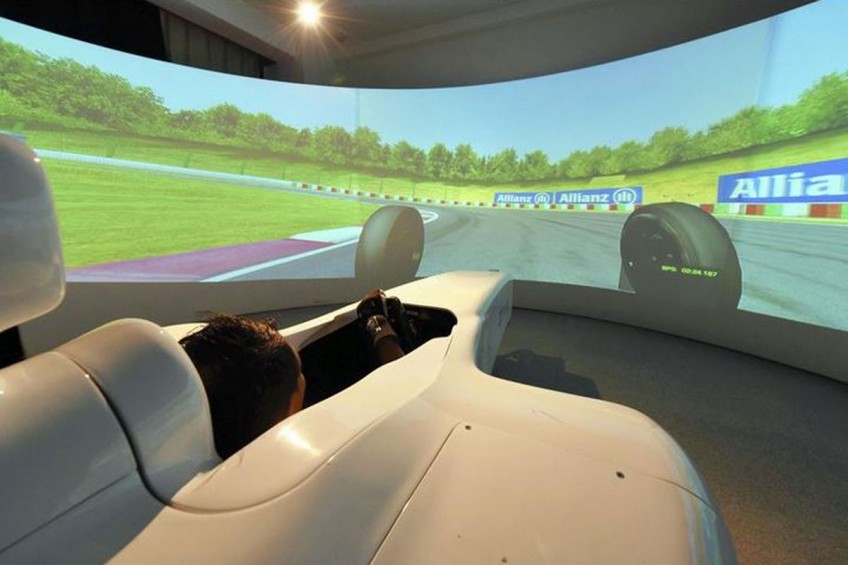 The simulator at Tokyo Virtual Circuit in Tokyo's Minato Ward, which allows visitors to experience the speed of a real Formula One race car.
The Yomiuri Shimbun

Facilities offering thrilling experiences are all the rage in Tokyo: Take in the view of surrounding high-rise condos before diving off a platform with no lifeline, glide through the air on a zip wire high above the ground, or try racing a Formula One car in a professional simulator. Here are a few adrenaline-pumping places I visited.

Opened three years ago in Tokyo's Akasaka district, Tokyo Virtual Circuit is a simulator for professional race car drivers that anyone can try as long as they pay the admission fee. The cockpit is exactly like that of an actual racing car, and videos shot from the racing driver's seat on circuits around the world are projected onto an enormous seven-meter-wide screen. It truly makes you feel like a pro racer.

Tokyo Virtual Circuit is a specialised facility for drivers associated with racing teams, such as those belonging to Toyota and Nissan. Recently, however, suit-clad businessmen have started appearing at the simulator.

"I'm hungry for the sensation of stepping on the gas pedal," said Koichi Nakamura, a 45-year-old company employee living in Tokyo's Shinjuku Ward. He had to give up his car after being transferred from Kyoto to Tokyo, and he visits the facility once a week.

After getting the chance to try it myself, I stepped on the gas. The scene that was before my eyes a moment ago immediately flew behind me, causing a slight state of panic. Before I knew it, I had slammed into a corner.

Many people who use the simulator become sick because their vision cannot keep up with the sheer sense of speed. I was told that elderly visitors are advised to take motion sickness medication before getting behind the wheel.

Tomohiko Sunako, a 50-year-old former top driver who serves as an instructor, says, "Just once, I want [visitors] to feel like an F1 racer, to experience the world at 300 kilometers per hour."

"Survival games" in which players separate into teams and fire at each other using air guns are usually played in mountain forests and ski slopes outside the city. This February, however, a roughly 900-square-meter specialised facility called Survival Game Field ASOBIBA was born in an office building in Tokyo's Akihabara "electric town" district.

Upon entering, a space that has been realistically modeled as an abandoned building in a forest spreads out before you. The facility is popular with groups on their way home after work, since it is near the train station and rents out the required equipment such as masks and plastic goggles for protecting your eyes from pellets. Decked out in camouflage fatigues, a 27-year-old male civil servant from Yokohama said excitedly, "Everyone's closer together since it's indoors, and you can enjoy the sense of tension."

Falling without a lifeline

Open during the summer, UGOKAS, near the Yurikamome Line's Shintoyosu Station in Tokyo's Koto Ward, is billed as a facility where you can "get active in the city." It has 15 different attractions, including a 130-meter-long zip wire on which visitors can glide 10 meters off the ground, and an 11-meter-high climbing wall. I tried "Zero Shock," which lets you free-fall, untethered, from six meters above ground.

The jumping platform is about as tall as a building's second or third floor, so it feels quite high when you factor in your own height.

My legs locked. I was only airborne for an instant, before being enveloped in the two-meter-thick air mattress on the ground, but it felt like I had actually dived off a building.

"There's no tether; it's the kind of thrill you cannot get with a roller coaster," gushed Marie Yasuda, a 22-year-old university student in Shinagawa Ward, Tokyo, who tried it with her friends.

Construction supply rental firm Nikken Lease Kogyo Co., which is based in Tokyo's Chiyoda Ward, is the operator of UGOKAS. The company got its idea for the facility after seeing rescue team training sessions. UGOKAS, which is set up using construction scaffolding, has been open every summer for the last three years, during which it has seen over 100,000 visitors and has become "popular with thrill-seeking young women." This year's season has already ended, but there are plans to open UGOKAS next summer.

There are many different types of facilities offering excitement to Tokyo's city dwellers. This reporter leaped off a high platform and tasted F1-level speeds. Even though I knew that my safety was being accounted for, I felt fear first and foremost.

This happened, despite the fact that I should be well used to the "thrill" of never knowing when I might be yelled at by my boss.