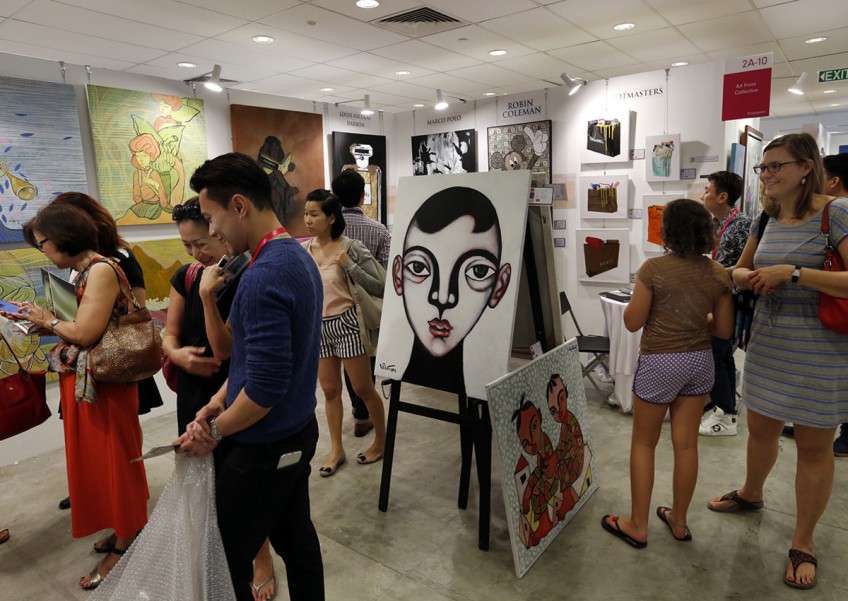 The latest edition of the Affordable Art Fair has continued to prove its popularity among art lovers here, pulling in both visitors and strong sales figures.

At last week's fair, held over four days from last Thursday to Sunday, $3.9 million in sales were made and 15,150 visitors showed up. That is a substantial increase from April's edition with $2.8 million in sales and a total of 13,400 visitors.

This is the second year the Affordable Art Fair, which offers works priced between $100 and $10,000, is holding two editions in one year. When it was launched here in 2010, it was an annual affair.

Last week's edition fared worse than last November's fair, which had $4.96 million in sales and 18,200 visitors, and the smaller number of galleries this time may have had something to do with it.

Last November's edition featured 108 galleries, while the latest one had 86.

Mr Kenneth Tan, co-founder of local gallery Utterly Art, which has participated in the fair since its inception, says: "The fair feels so much more spacious. It used to feel quite cramped, but this time, I felt the space was set up in such a way that it was very conducive for me to stand with buyers and have proper discussions with them."

He co-owns Utterly Art with Dr Pwee Keng Hock. Their booth was one of several galleries featuring Star Wars-themed art pieces, perhaps an unsurprising trend as the highly anticipated new movie Star Wars: The Force Awakens is due to open in cinemas next month.

On the two Star Wars-themed pieces sold at his booth, both created by local contemporary pop artist Andre Tan, Dr Pwee says: "Those were the most photographed pieces at our booth. With the movie opening soon, people are excited."

Other Star Wars-themed pieces spotted included Yves Pallies' Let The Force Be With You at the White Space Art Asia booth, and Ryan Callanan's Han Double (Trooper Version), hanging on the Under $1,000 Wall, where curated artworks are priced below $1,000.

Galleries that showed at the fair for the first time included Singa- pore's Asian Art Platform and Myanmar's The Yangon Gallery, with both reporting that they left the event with good impressions.

Director of Asian Art Platform, Ms Alice Zou, 27, says the $35,800 that her gallery made at the fair "definitely crossed expectations". Her booth featured pieces by artists such as China's Cai Jun.

She says: "As a first-time exhibitor, I think we got fantastic results. I used to work with galleries that participate at higher-end fairs such as Art Stage, so this was a very refreshing experience for me.

"Most of the collectors at this event are very open-minded to new artists and new mediums, so that's really encouraging for the art scene."

The Yangon Gallery sold two works totalling $9,800, including a painting by Aung Htoo, who has also shown at Art Basel Miami.

Ms Lynn Whut Hmone, exhibition coordinator for The Yangon Gallery, says: "Many people were attracted to Aung's paintings and asked for our contact to look at more of his works at our gallery in Yangon, which is great.

"In Myanmar, art collectors tend to be more interested in the fine arts - the traditional acrylic on canvas. But I've noticed that Singapore collectors are more open to different mediums and appreciate different types of art."

But it is only in recent years that Singaporean art collectors are showing more interest in non-traditional pieces, says Ms Soo Turner, the art consultant at British booth Turner Barnes Gallery. Her gallery has participated in every Affordable Art Fair show here since the second edition in 2011.

Says Ms Turner, whose booth sold pieces by artists such as Natasha Barnes and Tessa Pearson: "Just five years ago, I think Singaporeans were less open to pop art and art in other mediums. But in recent editions, it's clear that there are new collectors in Singapore who are more open to different forms. It's really wonderful and I love bringing the gallery here."

Interior designer Suzanne Chin, 37, bought her first piece of art - Come Back by Eva Kaiser - for $3,000 at the fair. She says: "I've attended art fairs before, but there was something about this painting that jumped out at me. I just had to buy it, the colours and composition spoke to me.

"I will hang it in my living room. I believe I'll be buying many more pieces in the future."