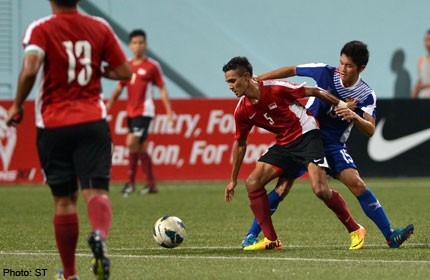 SINGAPORE - Less than a week has passed since he was installed to mastermind Singapore's gold-medal assault at December's SEA Games.

But, already, Aide Iskandar has more or less decided on the 20 Under-23 players who will be on the plane to Myanmar.

"I have a good idea of the team that will be going to the Games," the 38-year-old said on Tuesday.

He was speaking to The Straits Times a day after inheriting the role from V. Sundramoorthy, who left to take charge of Malaysian second-tier side Negeri Sembilan.

In truth, the bulk of the Myanmar-bound squad will select themselves. After all, the LionsXII team who clinched the Malaysian Super League title under Sundram consisted mostly of U-23 players.

Aide will augment his final 20 with players from the Courts Young Lions side whom he also coaches.

"But, first, I want to see how my boys can integrate with the LionsXII players," he added.

His biggest challenge in the coming weeks will be to fill the gaps left by Baihakki Khaizan, Isa Halim and Shahril Ishak.

The trio have been an integral part of the LionsXII's success but are ineligible to play in the SEA Games as they are overaged.

Among the candidates to take over from Isa in the middle of the park is 22-year-old Aqhari Abdullah, who played the full 90 minutes as a Singapore B team led by Aide fell 1-2 to a Laos XI at the Jalan Besar Stadium.

Nazrul Ahmad Nazari gave the hosts an early lead but the visitors came storming back with two second-half goals after the sending-off of left-back Ali Hudzaifi.

"Today's result was not a big factor," the coach later stressed. "It was all about performance."

Aqhari needed no reminding of this. "Isa's is a very big role to fill," said the LionsXII man, who is bidding to make his SEA Games debut.

"These friendlies are very important for players like me to show what we can do and that we're ready to take our chance."

Aqhari faces stiff competition for the central midfield role, with Zulfahmi Arifin and Izzdin Shafiq also in the mix.

But it is up front that Aide is likely to shuffle his pack in the absence of playmaker Shahril.

The Young Lions coach is sweating on the fitness of striker Khairul Nizam, who is still a week or so away from resuming training after injuring his quadricep and hamstring at last month's Merdeka Tournament.

If the 22-year-old proves his fitness, he should lead the Republic's attack with LionsXII team-mate Shahfiq Ghani deployed in the hole behind him.

Finding a replacement for Baihakki promises to be less of a headache.

A veteran of two SEA Games, Afiq Yunos is expected to slot in seamlessly alongside Safuwan Baharudin at the heart of the Singapore backline.

"I've played with Safuwan for a long time," the 22-year-old said of his former Young Lions team-mate. "We share a good understanding so there should not be any problems."

Indeed, as the pair approach their final shot at SEA Games glory, Afiq is determined to go out with a bang.

"This is our last chance," he pointed out. "And we'll definitely be going for gold."