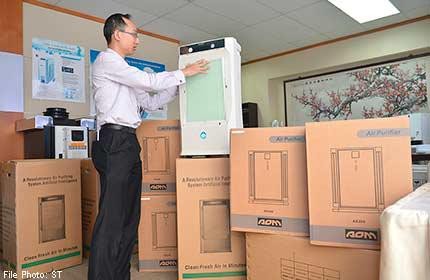 SINGAPORE - With the haze from Sumatra's plantation fires, more people stayed indoors and air cleaning devices flew off the shelves. But even on clear days, pollutants such as cigarette smoke and compounds in paints and lacquers, pesticides, and insect repellents may be present in the air.

These pollutants include chemicals, gases and living organisms like mould and pests. These pollutants can cause health problems like sore eyes, burning in the nose and throat, headaches and lethargy."

"Some pollutants can cause or worsen allergies in people who are prone to such illnesses. They can also aggravate asthma, and can sometimes lead to heart disease, cancer and at high levels like carbonmonoxide can cause death. Some people who do not have sensitivity to the indoor pollutantsmay develop sensitivity if the exposure continues over an extended period."

However, he says, not all people are affected by the same symptoms or same severity. Infants, children and the elderly aremost vulnerable to indoor pollutants.

"One should not expect that installation of an air purifier willmean nomore adverse health effects from indoor pollutants.

The evidence is weak that air-cleaning devices are effective in reducing asthma symptoms associated with small airborne particles. Thesemethods can be considered as preventive, as they help to reduce the effects of indoor air pollutants which can cause symptoms," he adds.

Air purifiers clean the air through amechanical process, while air ionisers use electricity to trap harmful particles in the air."

"Hepa filters are well-known for their effectiveness in capturing airborne particulates up to a size of 0.3 microns. Consisting of tightly woven screen of fibres, Hepa filters are the best recommended filter media to intercept and trap these.

"However, if you would like to have an additional air purifying function such as elimination of airborne germs or even surface-bound germs, an air steriliser or air ioniser is the preferred choice."

Panasonic's spokesman says its air cleaners are equipped with both purifying and ionising functions. Its bestselling air purifier is the affordable PMF35A ($229). Depending on your needs, these devices come with additional functions.

Sharp's bestseller KC-A50E ($599) is an air purifier with humidifying function. Ms Yue Shumei, marketing officer, Sharp Roxy-Sales (Singapore), says: "The humidifying function automatically detects the humidity levels of your surrounding and then release the suitable amount of moisture to add a healthy level of humidity to the environment."

Apart frombeing both an air purifier and ioniser, the OsimuVenus which costs $598 (U.P. $798) hasmood light programmes andmusic therapy, and is said to improve sleep and overall wellbeing.

Using it correctly is important too. Dr Yang says: "The placement of a portable air cleanerwill affect its performance. If there is an identifiable source of pollutants, the unit should be placed near it.

"If there is no specific source, then the air cleaner should be placed where it will force clean air into occupied areas, and not be situated where walls, furniture and other obstructions will block the intake and outlet."

"Do not assume that the air-purifier will cleanse the roomof every indoor pollutant. There will be some such as particulate and gaseous chemical compounds from cigarette smoke that cannot be removed."

He adds that the efficiency of the device will diminish if it is not maintained by changing the filter or cleaning the electrostatic collection plates.

To reduce air pollution, Dr Yang advises unblocking sources of fresh air; following the instructions when using products or appliances that may release pollutants into the indoor air; eliminating sources of contamination such as not smoking and usingwater-based paints; cleaning and drying damp areas where bacteria or fungi grow and using a de-humidifier if needed; washing sheets and blankets regularly in hot water to kill dustmites; keeping pets out of the bedroomand off fabric furniture; and controlling pests such as cockroaches by closing up cracks and sealing leaks and not leaving food out in the open.