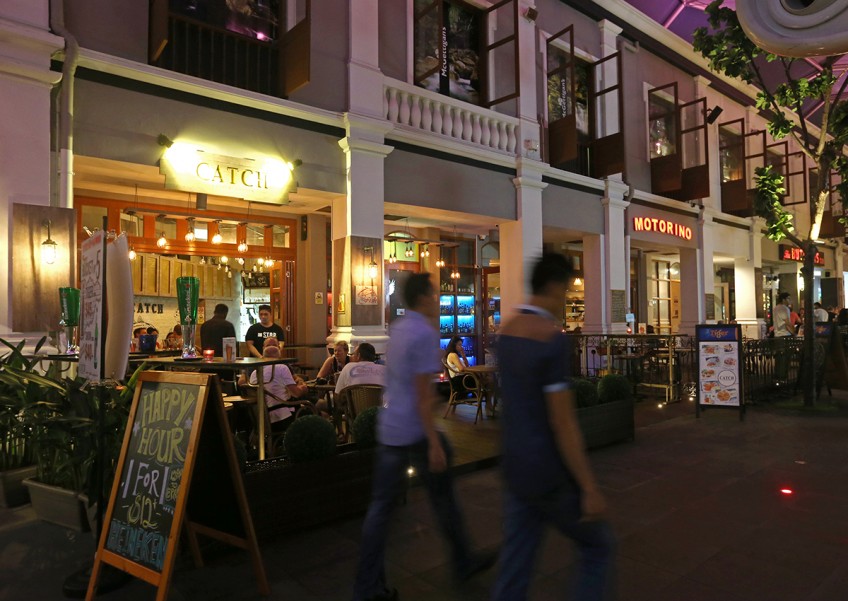 Is Clarke Quay having a new lease of life?

Admittedly, the riverside nightlife stretch has seen its fair share of tenants come and go, but since November, at least six new restaurants and bars have moved in.

Opening in the next few weeks are DV8, a Mandopop and Cantopop dance club; and Ramen Kaisuke Lobster King, a new offering from the popular Japanese ramen chain serving lobster broth ramen dishes.

All this activity comes ahead of the biggest player to enter the scene: iconic Jiak Kim Road nightclub Zouk, which is closing its old premises and moving into a 31,000 sq ft space in Clarke Quay in the middle of this year.

Some food and beverage operators have said they are capitalising on the megaclub's move into the area.

Prive Group chairman Yuan Oeij thinks this is an "exciting time to be part of the changing face of Clarke Quay".

He says: "With Zouk coming in and all the new things happening in the area now, it was also a very ripe opportunity to grow the Prive brand."

Associate Professor of marketing at the NUS Business School, Dr Lau Geok Theng, 60, says because Clarke Quay currently has many small pubs with live music, Zouk's arrival will fill the gap for a big, brand-name club.

Zouk is taking over the space where previous occupants have failed to take off, such as Zirca and Ministry of Sound.

Dr Lau feels that Zouk might fare better because, unlike its predecessors which catered to a younger crowd, it "has a fairly balanced customer base catering to different ages with the likes of Velvet Underground and Phuture".

Phuture targets a younger crowd with hip-hop and electronic dance music, while Velvet Underground caters to older clubbers who are into dance and house music.

Clarke Quay has about one million visitors a month, according to Mr Adrian Lai, 38, Clarke Quay's centre manager. Clarke Quay is owned and managed by developer CapitaLand Mall Asia.

With the new offerings, Mr Lai says that there are now more than 60 restaurant, bar and club options.

Even so, some people feel that the area has lost some of its vibrancy and buzz in recent years.

Ms Nanthini Jeyapal, 26, an educator who has been going to Clarke Quay since the late 2000s, says: "I feel that the vibe of Clarke Quay has died compared with the past. I don't see as many people hanging out there as before."

She feels that it is because "there are now more options for good food even in the heartland".

Clarke Quay is made up of five blocks spread out over 291,756 sq ft, roughly the size of four football fields.

Most of the new openings are clustered in Block C, which is bounded by Clarke Street, Read Street and River Valley Road. Zouk is moving there, making it the biggest tenant in the space formerly known as The Cannery.

The other blocks have also seen changes in the tenant mix.

In Block A, newcomers include 100-seater The Butchers Club Burger from Hong Kong and Faigo Hotpot, a premium hotpot outlet from China.

Some restaurants say that the proximity to Zouk was not a key consideration in their move to Clarke Quay.

For Maziga Cafe and Club, the priority was to find a suitable location to experiment with a new food concept: fusion Indian food.

The eatery's director of operations, Mr Chiranjeev Singh, 44, says that because Clarke Quay has a lot of bars, Maziga is a good fit as it is a casual snack eatery rather than a place for a full meal.

Comprising an Indian fusion cafe on the ground floor and a Bollywood-Bhangra club on the second level, Maziga Cafe and Club is run by the same team behind Punjab Grill by Jiggs Kalra in Marina Bay Sands.

The 80-seater cafe has a live tandoor oven right next to the doorway where you can see meats being prepared and cooked by the chef.

Vegetarian and non-vegetarian food items centre largely on snack foods, or chaats, such as Vada Pav burger ($9.90), a deep-fried spicy potato patty in a bun.

Experimental options include Old Delhi Golgappa Chaat with chillied Jaljeera Oxide ($12.90), which comprises crunchy hollow dough shells filled with potatoes and lentils, and topped with jaljeera water (a solution of powdered herbs) prepared with liquid nitrogen at the table.

When: Sunday to Tuesday and Thursday, 5pm to 2am; Wednesday, Friday, Saturday and eve of public holiday, 5pm to 4am

Fronted by guitar maestro Zul Sultan, the band, which have been together for more than 40 years, are best known for their covers of classic rock numbers by The Beatles and Santana. They play five times a week, on Monday, Thursday, Friday and weekends.

The venue, which can seat about 80, specialises in sharing platters. These range from Asian options (such as satay and spring rolls) to dessert platters ($64 to $79, with gelato shooters and chocolate fondue).

It is also the only bar in Clarke Quay with the British ale Fullers London Pride available on draught. Pint servings are generous, following the British Imperial pint system, making them 20 per cent larger than a standard American pint.

Located on the second floor of Block C at Clarke Quay, Mandopop and Cantopop club DV8 is set to open at the end of the month.

The bottle service club houses 17 sofas, four of which are reserved for VIPs. There are also standing tables for walk-in customers.

The club has a stage for live performances, hosting Singapore bands as well as those from around the region, including Hong Kong, Taiwan and Malaysia.

Unlike its competitors, DV8 caters to a slightly younger crowd aged from 25 and plays contemporary music by artists such as Taiwanese pop king Jay Chou and home-grown singer JJ Lin.

Prive Clarke Quay is the fourth restaurant opened by the Prive Group. Its other outlets are at Chijmes, Marina at Keppel Bay and the Asian Civilisations Museum.

Facing the fountain in the centre of Clarke Quay, the 300-seater eatery serves "approachable, all-day food", including Prive staples such as Wagyu beef burgers and sticky date toffee pudding.

There is also an all-day snack menu that goes at half price after midnight, catering to the late-night crowd. Options include snack-sized Wagyu beef sliders ($15) and Thai-style crab cakes ($12).

The highlights of the drinks menu are the individual beer kegs that replace beer towers at tables. Coming in either 1.8 litres (from $60) or 4 litres (from $128), the kegs are charged with carbon dioxide canisters so that you can pull your own beers at the table.

Live music comes courtesy of a two-piece band for more down-tempo music in the evening, progressing to a five-piece outfit playing Top 40 songs later in the night.