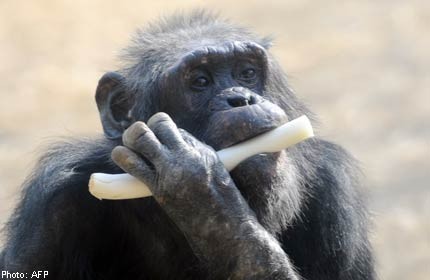 JOHANNESBURG - Scientists said Wednesday they were surprised to witness a chimpanzee and an orangutan swimming and diving in water - a skill that primates were thought to have lost long ago.

Evolutionary researchers Renato and Nicole Bender made the astonishing observation while filming two primates raised in captivity in the United States.

"We were extremely surprised when the chimp, Cooper, dived repeatedly into a swimming pool in Missouri and seemed to feel very comfortable," Renato Bender from the South African University of the Witwatersrand's School of Anatomical Sciences, said in a statement.

"It was very surprising behaviour for an animal that is thought to be very afraid of water."

The pair also observed an orangutan dubbed Suryia swimming at a private zoo in South Carolina.

Many zoos use water moats to confine chimpanzees, gorillas and orangutangs, and the apes often drown when venturing into deep water.

Humans and apes don't swim naturally and have to learn - unlike the majority of mammals that instinctively use the so-called dog-paddle.

Human-raised Cooper and Suryia both used a leg movement similar to the "frog kick" we use in the breaststroke, said the statement.

"The behaviour of the great apes in water has been largely neglected in anthropology," said Nicole Bender, from the University of Bern.

"That's one of the reasons why swimming in apes was never before scientifically described, although these animals have otherwise been studied very thoroughly."