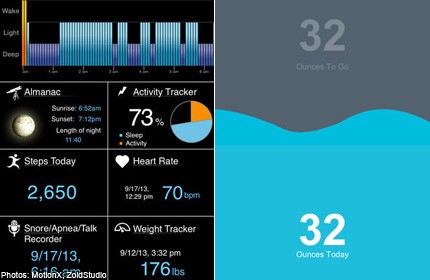 TORONTO - Keeping New Year's resolutions can be difficult but new apps aim to help people get organised, track progress and stay focused to reach their goals.

About 45 per cent of Americans make New Year's resolutions each year, according to the University of Scranton in Pennsylvania, which found that losing weight, getting organised and managing finances are the most popular resolutions.

"New Year's resolutions are difficult to keep because they're about behaviour change," said David-Michel Davies, executive director of the Webby Awards, which honour excellence on the Internet.

"But because mobile apps are with you all the time, they're something that can keep you on track minute-to-minute and hour-to-hour," he added.

People aiming to improve their health can turn to fitness trackers such as MotionX-24/7 for the iPhone. The app tracks metrics such as steps taken, calories burned, sleep quality and duration and heart rate.

"It brings together a bunch of different features found in popular fitness trackers and pulls them all into one app," said Davies.

Users can set daily activity and sleep goals and receive reminders to get active if they are idle for too long. The app, which cost 99 cents, is available worldwide.

Other activity tracker apps include Argus, free for the iPhone, and Moves, which sells for 99 cents and is available on iPhone and Android.

Keeping hydrated is another important element for staying healthy. With the free iPhone app Ounces users can set goals for water consumption, track how much they drink and receive friendly reminders to have another glass.

Although there are many apps to get more organised, Peter Walsh, a Los Angeles-based organisation expert, said people may want to declutter their digital lives first.

"When we are cluttered digitally or in our homes we feel paralysed," he explained.

Walsh recommends deleting apps that haven't been used in the past year and unsubscribing from unwanted emails.

He suggests Artkive, a free app for iPhone and Android, which allows parents to store a digital copy of their children's artwork, and Springpad, an app for iPhone, Android and Kindle that allows people to create notebooks around important areas of their life.

For managing finances, Davies recommends Mint, a free app for iPhone and Android, which helps people track spending. Students with loans for their education can use Tuition.io.

Anyone looking for new opportunities can use good.co, a website that helps people learn more about their work personality and jobs that might be a good match.

"It gives you a better sense of what you might find interesting in the world for future jobs," said Davies.