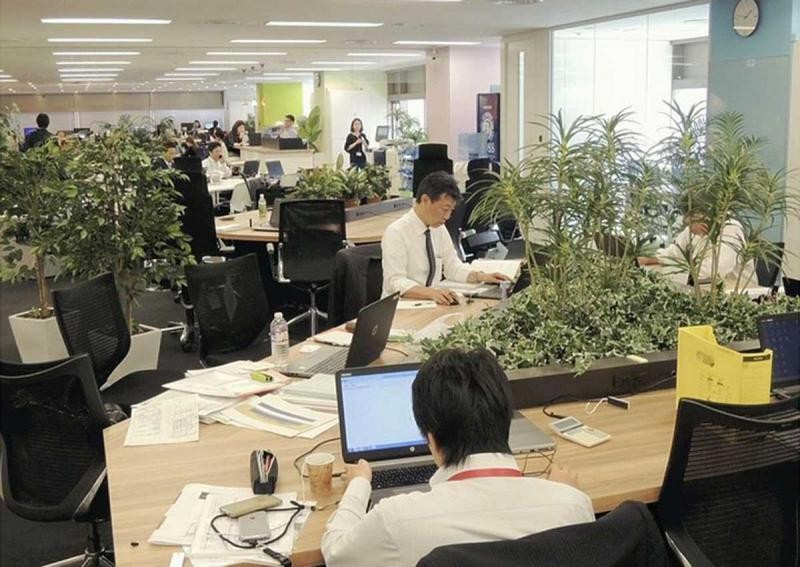 The lemon scent wafting from an aroma diffuser and the sight of green plants greet employees when they arrive for work at Mitsui Designtec Co., a Tokyo-based interior design company.

The effect of the aroma diffuser and potted plants, placed by the window or on top of round tables, helps relieve the stress of employees.

Some say they feel "as if they're working in a garden."

Efforts to improve working environments through pleasant aromas or background music are spreading among companies, so employees can relax and concentrate on their tasks.

The implementation of stress checks (see below), which became mandatory in December 2015, seems to have encouraged companies to take further efforts to keep their employees mentally agile.

When Mitsui Designtec partially renovated its office in October 2014, an open seating system was introduced so employees could sit wherever they liked.

Desks also were installed that could be raised or lowered to allow workers to either stand or sit.

A coffee space was added.

According to the company, more than 80 percent of the workers said they felt more comfortable with the new environment.

Yasuo Ishida, who was in charge of the renovation, said working efficiency had improved. "Monthly overtime hours were reduced by an average of 8½ hours per employee," he said.

Experts say having green plants and pleasant aromas in the workplace reduces stress.

Yukihiro Hashimoto, a professor at Polytechnic University who specializes in architectural environment engineering, has confirmed this through experiments.

Hashimoto, who is familiar with office environment issues, said having common plants like Benjamin's fig (a kind of ficus) is good enough. "Just looking at them regularly reduces psychological burdens," he said.

There are data showing that pleasant aromas reduce the number of typing mistakes when working on computer keyboards.

An increasing number of companies play music in the office.

The company said the number of companies choosing the service was increasing at a pace four times faster than when it was introduced in 2013.

"The companies are now paying a lot of attention to mental health because of the introduction of the stress checks," she said.

Tokyo-based staffing agency Staffservice is among companies that have introduced the service.

Since December 2015, music has been played in some of their offices in its headquarters building to relax employees and help them concentrate.

Employees hear the sounds of birds chirping when they arrive for work in the morning, and at 3 p.m. hear the radio broadcasting music that accompanies an exercise program.

Dvorak's "Going Home" is played at 7 p.m. to encourage employees to pack up and head home.

Moe Ishizuka, who is in charge of the background music, said the music has helped employees communicate better with each other. "People might be hesitant to speak in a quiet office, but background music makes them more talkative," she said.

Haruhisa Wago, a professor at Saitama Medical University who studies music therapy, said music with a fast tempo and pleasant chords, such as Mozart's piano pieces, not only helps reduce stress, but also improves concentration. "We can expect positive effects on productivity," he said.

There are several points to consider when trying out these methods.

Consider the differences in receptivity among people in regard to such things as aromas. Hashimoto recommends subtle scents since a strong aroma can be unpleasant for some people.

As for background music, it is better to vary the tunes. Playing the same tune over and over can make people less responsive.

Stress checks became mandatory for companies with 50 or more employees and should be held at least once a year.

Employees are asked, among other things, about their workload and relationships with their superiors, to have the level of their stress quantified.