Arrests over haze could be game-changer 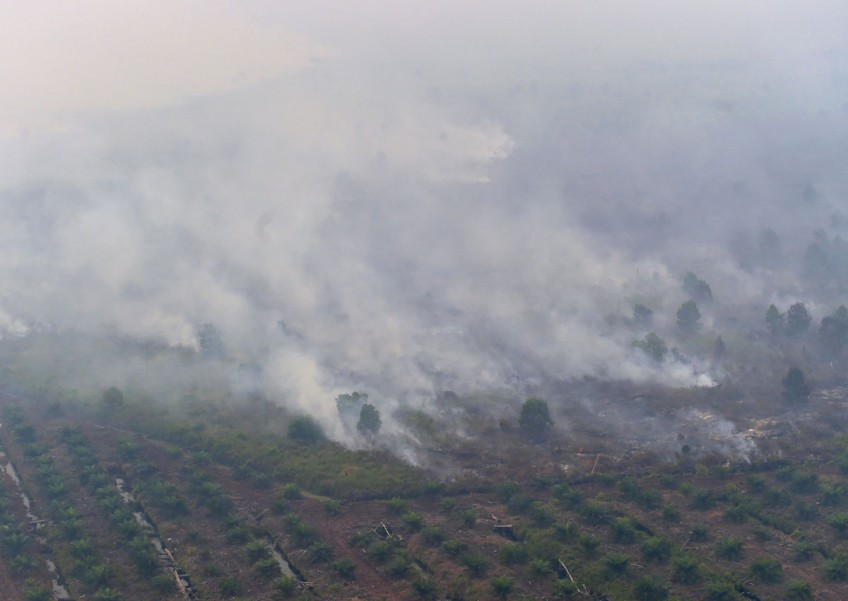 The call to get tough on those responsible for illegal forest fires raging in Sumatra and Kalimantan came from the top.

There was to be no more dragging of feet from the authorities, said Indonesia's Coordinating Minister for Security and Political Affairs Luhut Panjaitan during a high-level meeting in Jakarta on Tuesday.

Track down the culprits and send them to jail, ordered the former Special Forces general, who until recently was also President Joko Widodo's chief of staff.

Mr Luhut might as well be speaking on behalf of the President, who was on a working tour of the Middle East when the Pollutant Standards Index in the Riau capital of Pekanbaru hit a record 984 on Monday. Any reading of 300 and above is considered hazardous.

About 140 suspects, including seven described by Indonesian police as corporate executives, were promptly rounded up on Wednesday. The rest were individuals - farmers mainly - not officially linked to any of the larger firms, or their smaller suppliers that run plantations on concession land.

The swift action, particularly against the corporates, came as a surprise to many.

Such arrests are rare. Some would even go as far as to say they do not expect any convictions from these cases that primarily involve the breach of environmental laws.

After all, it's not the first time that suspects in such cases were arrested and charged in court.

Several cases dating back to 2012 and 2013 - the year when forest fires were so severe they caused record levels of air pollution in Singapore and states of emergency in Malaysia and Indonesia - remain in limbo with no convictions.

Getting tough on recalcitrant companies and individuals has always been a challenge for the Indonesian authorities.

Green groups and observers say investigations are often let down by poor law enforcement, corruption and unclear rules on land use.

No wonder national police chief Badrodin Haiti once said prosecuting crimes against the environment was more complex than dealing with terrorism.

There were, however, cases in which plantation companies were successfully prosecuted.

The recent case against Indonesian palm oil company PT Kallista Alam is one. The firm had its appeal rejected by the Supreme Court last month and was ordered to pay a staggering 366 billion rupiah (S$37 million) in fines for illegally burning peatland in Aceh back in 2012.

Peatlands are carbon-rich and highly flammable during the dry season. They release high levels of carbon dioxide into the atmosphere when burned.

Illegal forest fires on peatlands in Sumatra and Kalimantan have been the source of the haze that blanketed parts of Indonesia, Malaysia and Singapore in recent weeks.

Another example is the case of Malaysian firm Adei Plantation.

In September last year, a Riau district court sentenced one of the firm's managers to one year in jail and fined him 2 billion rupiah for failing to prevent forest fires on his company's estate in June 2013.

Adei, a subsidiary of Kuala Lumpur Kepong, was also fined 1.5 billion rupiah and ordered to pay 15.1 billion rupiah to repair the environmental damage caused by the fires.

That judgment came at a time when Indonesia was trying to show that it was willing to act on environmental offences.

Heavy penalties like the one meted out to PT Kallista Alam for offences under Indonesia's environmental laws, however, remain uncommon. In fact, prosecutors had sought a five-year sentence for the manager from Adei.

At the time, Mr Mas Achmad Santosa, who oversaw law enforcement monitoring at the now defunct presidential working unit, UKP4, said the penalties against Adei were too light considering the impact its actions had on the health of the people in Riau, and on the image of Indonesia in the eyes of Singapore and Malaysia.

"The fines for Adei do not compare to the efforts and resources put in by the government to fight the fires and the hundreds of billions of rupiah spent," said Mr Santosa at the time.

Green groups have continued to maintain that lenient sentences remain a weak link as the deterrent effect has not been felt, nor have they put a stop to the illegal burning of forests and peatlands in Indonesia.

However, the Environment and Forestry Ministry - which filed the lawsuit against PT Kallista Alam three years ago - reportedly said that the ruling against the firm on Aug 28 was a landmark decision considering the massive fine, which is possibly the highest ever imposed in an environmental law case.

Many are now hoping that the Supreme Court verdict would set a precedent for future law enforcement against such firms.

The Joko administration has shown it is willing to act during this haze crisis. For starters, it was quick to mobilise thousands of soldiers and policemen to help fight fires in Sumatra and Kalimantan.

The President himself made an urgent trip to South Sumatra - ground zero of the forest fires - for a first-hand look at the damage.

The police also confirmed yesterday that 20 other companies are under probe and more arrests are expected. While the spokesman stopped short of revealing their names - giving only company acronyms - this latest enforcement action and a renewed willingness to name and shame the firms could be a game-changer.

If Indonesia does lay down the law and sees through the prosecution of errant firms, business owners may be pressured into taking more responsibility for what happens on land accorded to them for cultivation.

This article was first published on September 18, 2015.
Get a copy of The Straits Times or go to straitstimes.com for more stories.