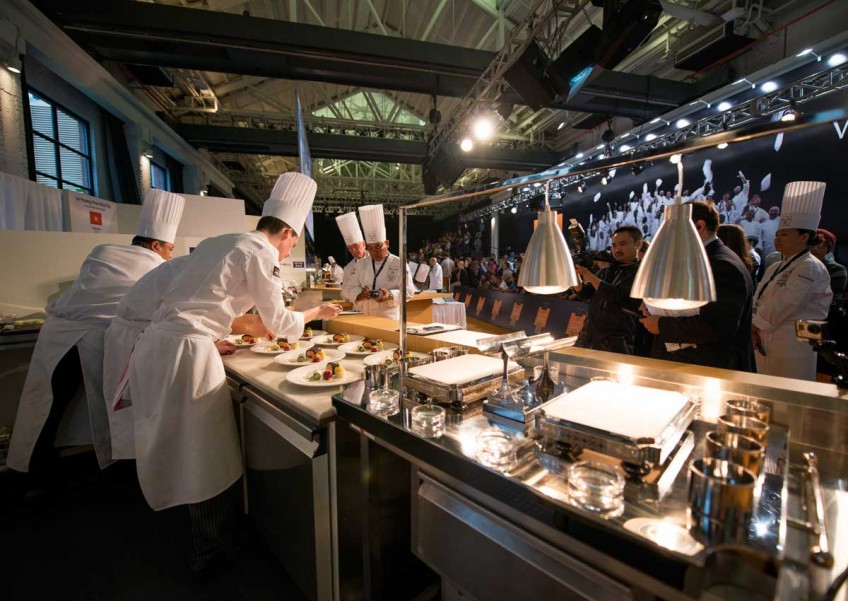 Jerome Bocuse can still recall the day the full weight of being the son of culinary legend Paul Bocuse landed on his shoulders. He was 20 years old, and had just arrived in the United States, where he was to study at the Culinary Institute of America (CIA).

"I walked into the huge hall where all the students were having lunch, and the hall went silent. People immediately knew who I was. I think that was the first time I realised my father was important, and the fact that I am his son meant they were going to be looking at me," he says.

Chef Bocuse is number 10 in the line of chefs in his family, after his father Paul who is considered one of the most famous French chefs of the 20th century.

The elder Bocuse started the world chef championship in 1987, naming it Bocuse d'Or.

The competition takes place once every two years in Lyon, France, where 24 young chefs from around the world have five hours and 35 minutes to prepare dishes in front of a jury and a live audience.

Next week, the Asia-Pacific Selection will take place over two days at Food & Hotel Asia 2016 in Singapore, where chef Jerome will make an appearance as the president of honour.

It will be his first time in Singapore, which he says is a country he has heard a lot about from people such as Daniel Boulud - a close friend from his childhood.

According to chef Jerome, growing up with a famous chef heading the household was not as glamorous as what some people might think.

He recalls that his father's packed daily schedule involved waking up at 5am, going to the markets, cooking lunch, taking a nap, then cooking dinner.

"That was every single day of the year, so there was no Christmas, no vacations, no family time. When you grow up in that kind of environment, it's not something that inspires you as a child," says the 47-year-old.

So instead, he found himself drawn to sports, and was even on the French national water skiing team in his youth. Unfortunately, a snow-skiing accident cut short his career as a professional athlete, so the natural next step was to attend cooking school in the US and follow in his father's footsteps.

Cooking as an art

After graduating from the CIA, chef Jerome furthered his studies at the International School of Hospitality in Miami, and later took over Les Chefs de France - a traditional French Restaurant in France's pavilion at Walt Disney World's Epcot Center in Orlando, Florida, where he is now based.

He recently started overseeing his father's restaurants in France as well, including the three-Michelin-starred L'Auberge du Pont de Collonges near Lyon, and shuttles back and forth between the two countries about eight times a year.

He explains: "The most important thing I've learnt from my father is to be faithful to your cooking. He believed in classical French cuisine, and that never changed.

I see a lot of chefs now are being influenced by trends and fads - they're losing their identity in a way."

It's something that comes from technological advancements over the years, he adds. Not only are the chefs of today being observed 24/7 by what they tweet, blog, or do, better cooking equipment also means that while food quality goes up, chef instinct is declining.

"Some of these equipment allow chefs to cook more as a scientist than an artist, and I think of cooking as an art... I wouldn't call it a problem, it's just part of globalisation. But I personally prefer sticking to the classics because, like the music of Mozart or Beethoven, I believe that's what will last," he feels.

Chef Jerome illustrates the current cheffing scene with an example from his father:

"Back in the 1960s, chefs would go to (my father) to ask for advice on making a name for themselves. He would say get out of the kitchen, talk to the press, travel the world. Today, my father is 90 years old. If you ask him the same question, his very short answer will be to get back into the kitchen."

Getting the basics right

So what does it take to be a good chef now? It starts with good produce, the right seasoning, cooking at the right temperature, and overall good execution. Whether it's about a Japanese chef slicing sushi, a French chef making blanquette de veau, or a Mexican chef making a simple taco, it's all about getting the basics right, chef Jerome notes. "In the end, if customers sit down and enjoy what they eat, have a smile on their face or ask for a second serving, then that's what it's all about. It's about sensations and sensibility in cooking - that's what's important."

FOR the first time in its almost 30-year history, world chef championship Bocuse d'Or - founded in 1987 by French culinary icon Paul Bocuse - will be holding its Asia-Pacific Selection here in Singapore.

Next week, nine teams from different countries including Singapore, Japan, Australia and China will be given five hours and 35 minutes each to prepare one meat and one fish dish over the course of two days. Out of them, five will then move on to represent their countries at the Grand Finale in Lyon next January.

Jerome Bocuse, son of Paul Bocuse, says the competition was brought to Singapore because of its strategic location in the heart of Asia. After this round, however, it will most likely move on to another country, possibly Japan.

"The final competition will always be in Lyon, but the idea is that in order to promote Bocuse d'Or, the continental selections will move between different countries for exposure," points out chef Jerome.

He adds that while Bocuse d'Or has been around for three decades - it celebrates that anniversary next January - it has still managed to remain relevant over the years by opening up to cuisines beyond just the European region.

"If you look at the history of Bocuse d'Or, you can see that French and Scandinavian countries were very prominent in the competition, and that kind of changed four years ago when Japan made it to the podium in Lyon. To me it was a revelation to see an Asian country making the podium with its cuisine. So I think Bocuse d'Or reflects what is happening in terms of trends and cuisines around the world."

The upcoming Asia-Pacific Selection will take place at the Food & Hotel Asia 2016 at Singapore Expo, with Team Singapore being headed by chef Yew Eng Tong. This year, his team consists of himself, his commis chef Hyunjun Choo, and his coach chef Michael Muller.

Says chef Yew: "A lot of people don't understand why chefs go for competitions, but no one asks why athletes go for competitions. It is for the same reason - a competition is a platform and opportunity to challenge yourself. I am allowed to seek perfection and push the envelope in all areas - from concept to technique, ingredients and presentation."

He is no stranger to the Bocuse d'Or stage either, since he has also taken part in the previous two rounds of the competition, albeit with a different team. Both times, he made it to the Grand Finale by taking first place in the Asia-Pacific Selections in 2012, and second place in 2014.

When asked about his team's strategy for this year, chef Yew reveals: "It's the same - to always do our best. We have also learnt from previous editions that we should add Asian elements, but it should always be subtle and not in-your-face. There still has to be a French or international perspective."

It's a good thing then that president of the jury Tetsuya Wakuda says that's just what contestants need to stand out - a combination of French cuisine with the influence of their own culture.

Other things he will be looking out for are "originality, taste, texture and combination of flavours".

In the upcoming competition, chef Yew will also have the assistance of the Bocuse d'Or Singapore Academy which was set up this year, headed by chef Bruno Menard. It comprises a committee, mentor chefs (such as Julien Royer and Frederic Colin), as well as past competitors.

While chef Menard acknowledges that the competition will be tough, he believes there is a chance that Singapore will one day see another William Wai - the only Singaporean who received a medal at the Bocuse d'Or Grand Finale (in 1989).

"There's always a chance, that's what competitions are about," he notes. "Even the best chefs have to be at their best on that day, because the standard is so high - a small thing can change everything."

Chef Menard adds that the winners of Bocuse d'Or go on to have "bright futures in the industry", and the competition showcases the "superstars of tomorrow".

That's the hope for chef Yew as well, especially since this competition is likely to be his last.

"Having participated in a competition has made me a much-better chef. Yes, it is not possible to run a restaurant with the kind of dishes we create for competitions as it is too much work and will be too intense, but the experience from training automatically makes you better," he says.

He adds: "I think it's time that we raise the next generation of chefs. The Bocuse d'Or Singapore Academy will likely hold a national competition next year to identify the next candidate, and I will be happy to share all my experience with that person."

The Bocuse d'Or Asia-Pacific Selection runs from April 14 to 15, at the Food & Hotel Asia 2016 at Singapore Expo. Log on to www.bocusedor.com (http://www.bocusedor.com) for more information