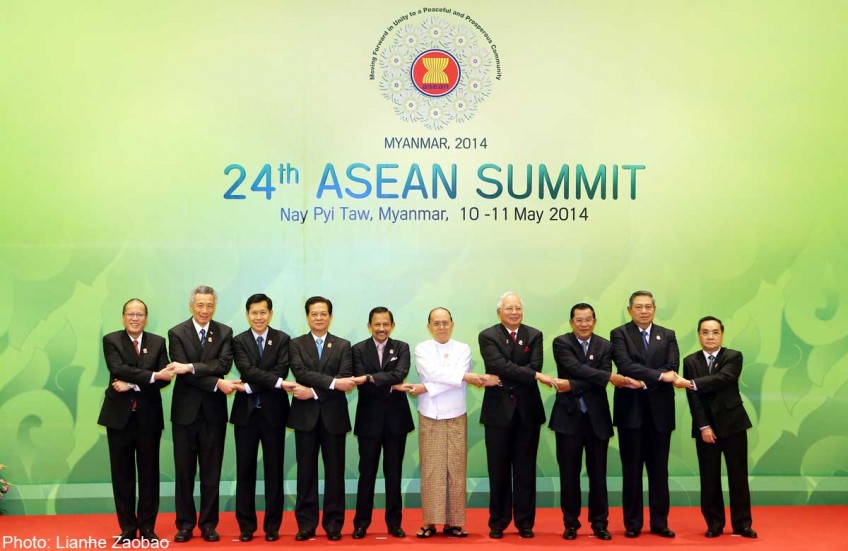 For the first time in the history of ASEAN, the 10-nation South-east Asian bloc failed to issue its customary final communique at the end of its foreign ministers' meeting in Phnom Penh, Cambodia in 2012.

The failure not only was a terrible loss of face for the 45-year- old organisation but it also threw up serious doubts about the idea of ASEAN centrality as a means of resolving the region's issues.

After all, the communique was aborted after the member states failed to agree on whether or not to mention the South China Sea disputes in the document.

Many of them - including the Philippines and Vietnam - had wanted ASEAN to resist Chinese insistence that any talks should exclude third parties. However, Cambodia, a close Beijing ally and chair of the grouping that year, wanted to leave out all mention of the disputes.

That battle would be played out again months later when the government leaders gathered in Phnom Penh for the ASEAN Summit. This time, only a last-minute compromise saved the meeting, halting the threat by some countries to disavow the chairman's closing statement.

Since then, there has been an ongoing debate among international relations experts about whether ASEAN can play a meaningful role in resolving the South China Sea disputes.

Critics say the grouping's lack of cohesiveness gets in the way of any idea of ASEAN as the central platform for diplomacy in Asia while proponents say ASEAN is the best and only bet the region has for a multilateral solution.

So, who is right and what are reasonable expectations to have of ASEAN?

For all the brickbats, most political leaders continue to hold up ASEAN as a critical platform for resolving key differences in the region. On a visit to China last month, Singapore's Foreign Minister K. Shanmugam was one of the latest to stress that ASEAN cannot afford to become a passive bystander in maritime conflicts.

Part of this is a recognition that ASEAN and its affiliated structures, like the Asian Regional Forum and the East Asian Summit, are currently the most well-known and well-established multilateral forums in Asia.

For those who hope to manage China's rise by binding it to accepted international norms, ASEAN still presents the most viable option.

ASEAN can also boast one minor achievement in helping resolve the territorial disputes. In 2002, China and ASEAN signed the Declaration on the Conduct of Parties in the South China Sea. It was a non-binding declaration urging restraint in the region but it still was the first time China had agreed to any sort of multilateralism on maritime disputes.

Beijing's long-held policy, which it continues to affirm, is that territorial claims should be resolved on a bilateral basis.

Since then, however, attempts to convert the declaration into a more binding code of conduct appear to have stalled. ASEAN thus has had little to show for its efforts on this front in recent years, which has led to growing pessimism about whether it is up to the task. At the heart of the criticism is the argument that ASEAN is not cohesive enough to present itself as an effective organisation to deal with maritime issues in the South China Sea.

ASEAN states currently take widely varying positions on the maritime disputes. There are pro-China countries such as Laos, Cambodia and Myanmar. Others, like the Philippines and Vietnam, welcome a more active role for the United States.

The rest, including Singapore, Thailand, Brunei, Malaysia and Indonesia, are either neutral or wary of US intervention. Professor Donald Weatherbee, a former visiting professorial fellow at the Institute of Southeast Asian Studies (Iseas), said that means "security is divisible" in ASEAN. He said: "A threat to one is not a threat to all."

Speaking at the Carnegie Endowment for International Peace think-tank in Washington, he added a withering assessment of ASEAN's process, noting that its joint statements tend to make "no decisions and demand no policy changes".

He said: "Since China has moved the issue to the forefront through its escalated unilateral militarism... within ASEAN, there has been no unity in solidarity in developing and pursuing a coherent and consistent ASEAN common policy. This is the issue that paralysed the 2012 Cambodia-led ASEAN foreign ministers' meeting and the issue that paralyses ASEAN today."

In fact, many observers also note that the consensus decision-making model and the commitment to not interfere with the sovereignty of member states mean that ASEAN often appears helpless to deal with regional issues.

For instance, though the persecution of the Muslim-minority Rohingya in Myanmar is gaining international attention, Myanmar has made sure the issue will not be discussed at ASEAN meetings while it holds the chair.

Then, there is the notion that ASEAN centrality cannot work in this instance because China rejects the idea.

Iseas senior fellow Ian Storey said: "China has, in the past, acknowledged that ASEAN occupies 'the driver's seat' in fostering East Asian cooperation... Yet, China has insisted ASEAN cannot take the lead on drafting the proposed code of conduct for the South China Sea and that talks must begin with a clean slate. To me, this implies that when it comes to managing the South China Sea dispute, China rejects ASEAN centrality."

Critics are pessimistic about whether the organisation can overcome these differences in the coming years. Some analysts ultimately believe the true value of ASEAN lies in simply being a platform where bilateral talks can take place, rather than as the provider of a wide multilateral solution.

Dr Sheldon Simon, an Asian politics expert at Arizona State University, in a recent essay titled Remaining Relevant, said: "Annual ASEAN summits are more significant for the bilateral deals concluded on the sidelines than any multilateral agreements made at the main event.

Restraint and code of conduct the way to go

While Singapore does not take sides in any of the disputes in the South China Sea, it has repeatedly stressed the importance of maintaining freedom of navigation and keeping tempers in check.

To that end, Singapore's leaders have long backed ASEAN's calls for restraint and for a code of conduct on the issue.

On a recent visit to the US capital, Prime Minister Lee Hsien Loong made it clear that he thought ASEAN had a role to play even if some member countries - like Singapore - were not parties to any claims.

"We don't all have to have a dispute in order to make common calls," Mr Lee told a dialogue organised by the Council on Foreign Relations. "If we want to be relevant in a regional architecture, then speaking together makes a lot more sense than speaking separately."

At the same session, he also backed the view that the conflict should be resolved using international law, rather than allowing a stronger country to push around a weaker one.

"From the point of view of a country which must survive in an international system where there are big countries and small, and the outcomes cannot be determined just by 'might is right', I think international law must have a big weight in how disputes are resolved." But while the South China Sea issue is seen as a critical one for the future of the region, Singapore's leaders have also wanted to ensure that it does not derail cooperation on other issues.

This position was most recently articulated by Foreign Minister K. Shanmugam during a visit to Beijing last month.

"I can say that our common view is that no one issue should dominate the agenda between China and Singapore and ASEAN. And really, the role that China and ASEAN play to each other is multifaceted," he said.