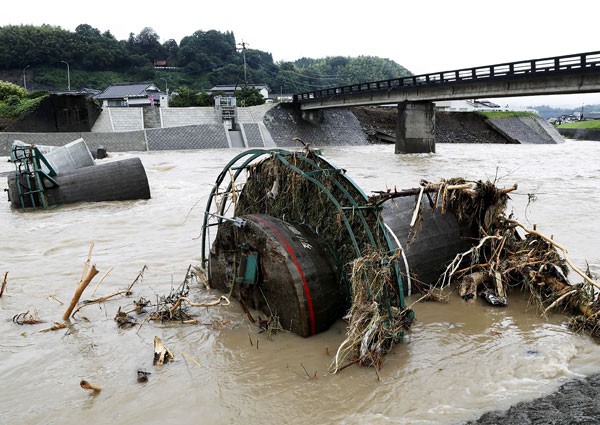 Collapsed support columns to a railroad bridge over the Kagetsu River are seen after the bridge was swept away by floodwaters in Hita, Oita prefecture, on July 6, 2017.
AFP

A man died in Asakura, Fukuoka Prefecture, and another man caught in a landslide was in cardiac arrest in Hita, Oita Prefecture, as heavy rain continued to batter the northern part of the Kyushu region on Thursday.

Eleven people are unaccounted for in the prefecture, according to the Fukuoka prefectural disaster response headquarters.

The Japan Meteorological Agency warned Thursday that heavy rain would continue to hit northern Kyushu through Friday, calling for a heightened alert for flooding of low-lying land and rising rivers.

The agency said 250 millimeters of rainfall was expected over the 24 hours to 6 a.m. Friday in northern Kyushu, while rainfall of 150 millimeters was forecast in the southern part of the region.

On Thursday morning, relevant ministers held a meeting at the Prime Minister's Office and confirmed they would work together with municipalities to make every effort to help people affected by the heavy rain.

Ahead of the meeting, Chief Cabinet Secretary Yoshihide Suga told a press conference that about 7,500 personnel from the Self-Defence Forces, police and fire departments have been mobilized for rescue and relief efforts since early Thursday morning.

The government intends to increase its activities as the disaster situation requires.