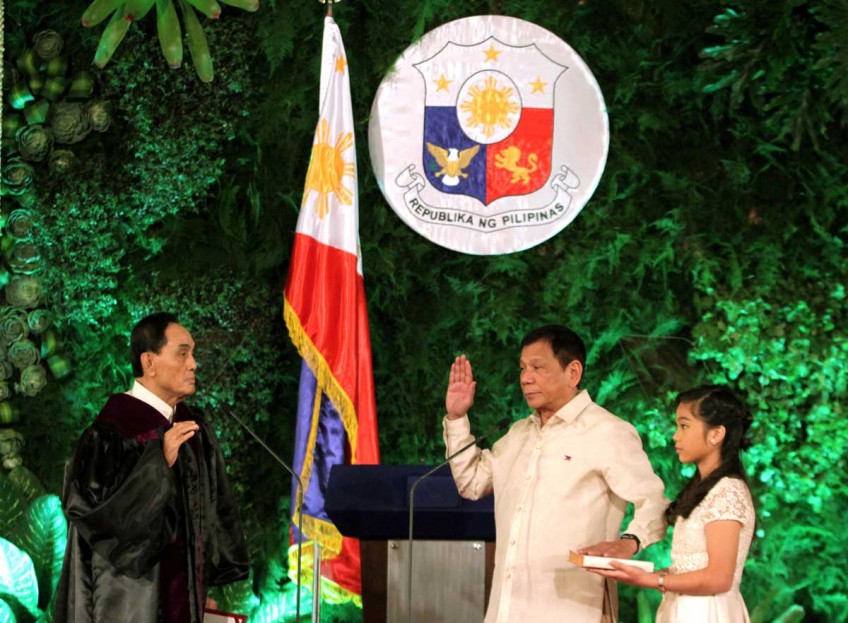 President Rodrigo Duterte takes his oath before Supreme Court Justice Bienvenido Reyes as his daughter Veronica holds the bible, during his inauguration as President of the Philippines at the Malacanang Palace in Manila, Philippines June 30, 2016.
Reuters

MANILA - Rodrigo Duterte was sworn in as Philippine president on Thursday after a landslide election victory last month built on a series of bold and controversial pledges.

Here are 10 ways Duterte plans to change the Philippines during his six years as president:

1) Duterte has said he must take extreme measures to stop the Philippines becoming a narco-state. Security forces will be given shoot-to-kill orders. Bounties will be paid for killing drug dealers. Ordinary citizens will also be encouraged to kill suspects. The death penalty will be restored, by hanging.

2) Duterte, who rails against "Imperial Manila", intends to change the centralised government to a federal system in which newly created states would have a large degree of autonomy. They would also be able to keep most of their revenues. Doing so will require rewriting the constitution.

3) Duterte insists he can end decades-old Muslim and communist rebellions, which have claimed tens of thousands of lives. Peace talks with the communists are set to start this month. He expects federalism will appease Muslim rebels, who want autonomy.

4) Duterte wants to slow the Philippines' fast-growing population, which recently surged past 100 million. He says families should aim for a maximum of three children. Duterte wants government agencies to supply the poor with free condoms and birth control pills. A 2012 law allowing for that has not been fully implemented, partly due to opposition from the powerful Catholic church.

5) Duterte describes himself as a "socialist", and has vowed to change an economic model that has created one of Asia's biggest rich-poor divides. Roughly one quarter of the population live below the poverty line. He says federalism is one key to this. But he also plans to continue with the successful macro-economic policies of his predecessor, Benigno Aquino.

6) Duterte plans to roll out a nationwide curfew on children being on the streets alone late at night. He also wants to ban alcohol being served in public past midnight, and stop people from singing karaoke - a national passion - in public late in the late evening.

7) Duterte has promised to rid government agencies, police and the military of deep-rooted corruption. But aside from general statements, such as corrupt officials should "retire or die", he has not explained how he would fix one of the Philippines' most intractable problems.

8) Duterte intends to allow late dictator Ferdinand Marcos to be buried at a cemetery for national heroes, saying this will help end decades of social division over the issue. But human rights victims say this will help whitewash the dictator's crimes.

9) Duterte is in favour of changing the constitution to lift restrictive foreign investment laws. Duterte told telcos to improve one of the region's slowest Internet connections or face competition from foreign players. But he is opposed to foreign ownership of land.

10) After relations with China plummeted during Aquino's term over a South China Sea territorial dispute, Duterte has said he wants "friendly" ties with Beijing. Aquino refused to hold direct negotiations with China over the maritime dispute, but Duterte is open to one-on-one talks. He is also courting Chinese investment in infrastructure.