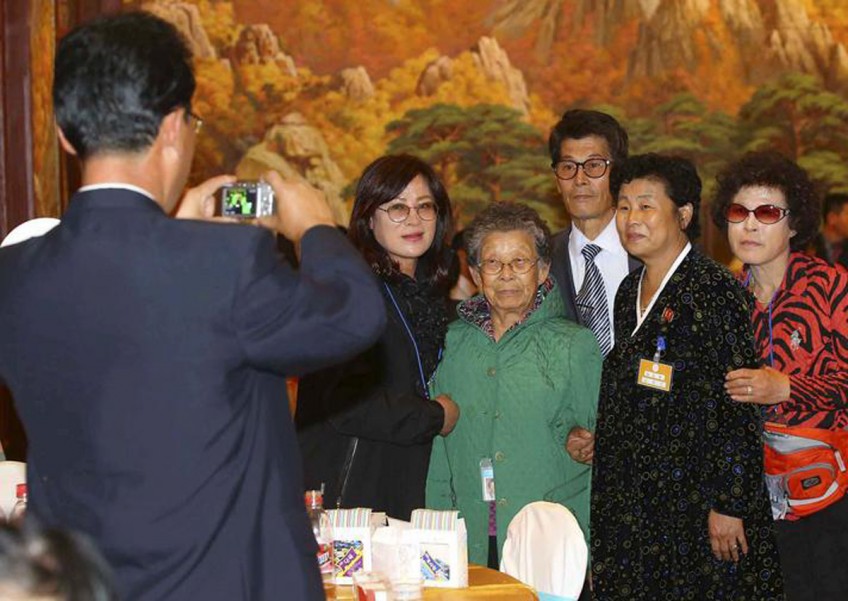 North and South Korean family members of Jung Kun Mok (3rd right), a former fisherman who was abducted by North Korea decades ago, pose for a group photo during the separated family reunions at Mount Kumgang resort on October 25.
Reuters

SEOUL - North and South Korean families divided since the Korean War said a tearful final farewell Monday, wrapping up a rare reunion that was clouded at the last by a maritime border spat.

After three emotionally fraught days of seeking to redress more than 60 years of separation, the reunion ended on the most traumatic note of all - a goodbye that for most of the elderly participants marked the last time they will ever see each other.

Around 1,000 relatives from both sides took part in the week-long event - a tiny fraction of the tens of thousands wait-listed for a reunion slot.

Divided into two rounds, it was only the second gathering in five years for those torn apart by the 1950-53 Korean conflict.

The two Koreas had agreed to the reunion as part of a deal brokered in August to ease tensions that had pushed them to the brink of armed conflict.

The fact that it went ahead as scheduled had encouraged those who hoped the deal might usher in a period of detente, but the inherent volatility of North-South ties was underlined on Saturday by an incident on their disputed maritime border.

It was a minor spat, with a South Korean naval vessel firing warning shots at a North Korean patrol boat that had strayed across the border and promptly returned.

But Pyongyang insisted it was a dangerous and deliberate provocation by the South that could "totally derail" the August agreement.

The accord had also envisaged the resumption of official talks between the rival Koreas, but there has been no sign to date of such a dialogue getting under way.

The latest reunion, meanwhile, ended with no commitment as to when the next one might be held.

Given that there are more than 65,000 South Koreans currently on the waiting list for a reunion spot, those selected represent a very fortunate minority.

But Monday's scenes of relatives clinging to each other and weeping at their final breakfast meeting underlined the emotional cost that gatherings exact.

The "three-day" tag attached to each reunion round is misleading. In reality, that boils down to just six, two-hour sessions - only one of which allows the separated relatives to meet in private.

Among those reunited over the last three days was Lee Bok-Soon, 88, and the son she had not seen since he was abducted by the North in 1972 while on a fishing boat in the Yellow Sea.

"I am alive and have lived a good life," her son, 64-year-old Jung Gun-Mook told Lee during one of their meetings monitored by an ever-present North Korean official.

North Korea has rejected repeated requests from the South to make the reunions longer and more frequent.

South Korean participants say the events are wrenchingly short and over-politicised, with their North Korean kin obliged to parrot official propaganda during their monitored conversations.

The reunion programme began in earnest after a historic North-South summit in 2000, and was initially an annual event, before strained cross-border relations interrupted their frequency.

Pyongyang has long manipulated the reunion issue as a tool for extracting concessions from Seoul, and sees its agreement to hold the meetings as an act of diplomatic largesse that merits reward.

Observers say the North has little to gain from the reunions, and is focused solely on restricting the amount of time its citizens spend in the company of their clearly more affluent South Korean kin.