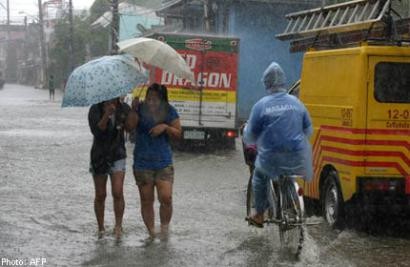 MANILA -Deaths from the heavy rains caused by the intertropical convergence zone in the Visayas and Mindanao in the past few days rose to 20, the National Disaster Risk Reduction and Management Council (NDRRMC) said on Friday.

The NDRRMC said that two persons were killed in Western Visayas, eight in Central Visayas, six in Zamboanga Peninsula, and four in Autonomous Region in Muslim Mindanao. All the new deaths were killed from drowning.

Two were still missing since October 4 in Negros Oriental. They were identified as Palomar Lafranco and Erwin Cadimas.

There were also 87,096 persons housed in shelters as of Friday morning, the NDRRMC said.

In Zamboanga City, classes remained suspended on Friday due to floods.

The rains from the ITCZ pelted areas of Visayas and Mindanao since Friday last week until Wednesday.

Combined resources from the Department of Social Welfare and Development, local government units and non government organisations have allocated about P5 million worth of relief assistance.