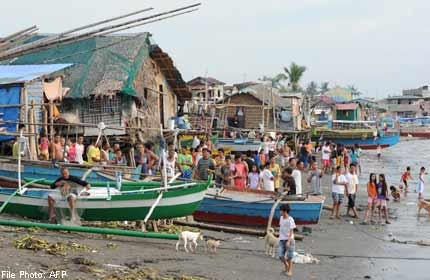 A fisherman(front-L) checks his net at a fishing village in Cavite north of Manila on August 9, 2013.

MANILA - Twenty-three people were missing as Typhoon Utor swept across the northern Philippines on Monday, ripping roofs off houses, tearing down power lines and triggering landslides in remote villages.

With wind gusts of 200 kilometres (124 miles) an hour, Utor was the most powerful storm to strike the Philippines this year and authorities were on alert for worst-case scenarios.

"This has the strongest sustained winds for the year," government weather forecaster Samuel Duran told AFP.

Hundreds of people die each year in the Philippines from the roughly 20 typhoons that strike the country annually.

There were no immediate reports of casualties from Utor on Monday morning, but the national disaster agency said it was concerned for 23 missing fishermen.

"They went out to sea before we declared that a storm was approaching," said National Disaster Risk Reduction and Management Council spokesman Reynaldo Balido.

"We are still hoping that within the day, they will return home. The practice in those areas is if a storm is approaching, they seek refuge somewhere."

There were also concerns for remote towns and villages that had been isolated by the storm, with telecommunications networks to the areas out of order and roads cut off by landslides.

After building strength in the Pacific Ocean, Utor hit the northern regions of the main island of Luzon at 3:00 am on Monday (1900 GMT on Sunday).

Television footage from Aurora province, along the east coast of Luzon where Utor made landfall, showed uprooted trees that had fallen on top of houses, while roofs were ripped off some buildings.

The civil defence director for Aurora province, Josefina Timoteo, said reports had been received of more than 600 houses and 12 school buildings being damaged in one town, Dinalungan.

Alex Uy, the civil defence chief in charge of the northern mountain city of Baguio, said power outages were widespread across northern Luzon.

"The wind speed is strong enough to topple power lines. Even in our office, we have no electricity. We have to use a generator," Uy told AFP.

As of midday (0400 GMT), the storm was about half way across Luzon, passing over some of the most mountainous and isolated terrain in the country, moving westward towards the South China Sea.

It was expected to move out of the Philippines by late Monday, according to the weather bureau.

In Manila, the nation's capital, roughly 200 kilometres to the south of the storm, there was heavy rain overnight but no major flooding.

With more rain expected, many schools across the capital were closed on Monday.

Over a thousand people were killed when Typhoon Bopha hit the Philippines in December, the most devastating storm in the world for 2012.