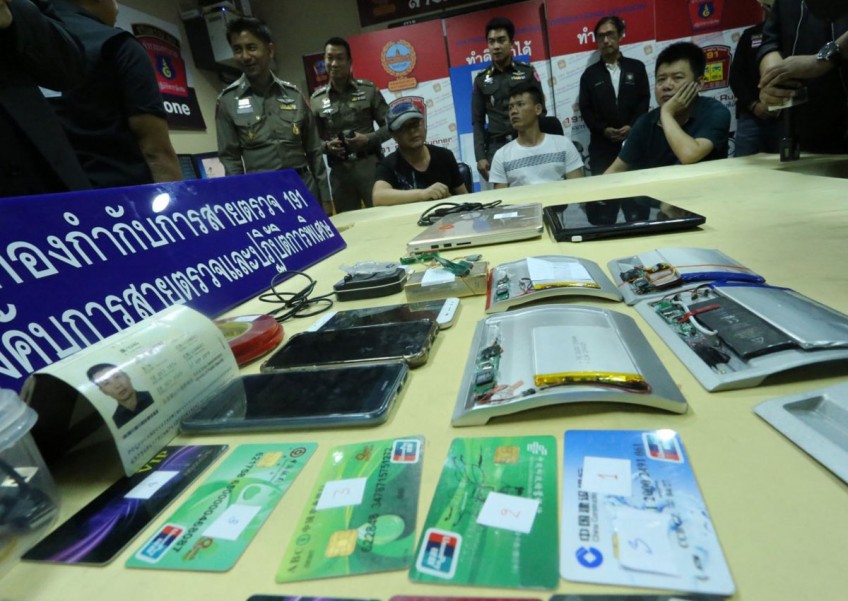 Three Chinese men, arrested in Huai Kwang district of Bangkok on Monday night, are presented along with evidence at a press conference on Monday.
The Nation/Asia News Network

Three chinese men have been arrested on suspicion of skimming after one of them was caught allegedly installing a device to copy data from customer cards at an ATM booth in Bangkok's Huai Kwang district on Monday night.

The three men - along with another elusive Chinese suspect identified as Zhong Lang Ming - were believed to belong to a larger gang which installed the skimming devices at various locations in Bangkok and Chiang Mai.

They are facing charges of having possession of instruments or materials for electronic card counterfeit or alteration, which is punishable by one to five years in prison and a fine between Bt10,000 (S$408) and Bt100,000.

Pol Maj General Surachet Hakpan, the 191 patrol and special operation division's chief, said Zhong Fuhua was arrested first near the Central Rama 9 subway station in Huai Kwang while he allegedly removed the skimming device and camera from an ATM machine on Monday night.

Police later arrested his two accomplices along with more evidence.

Zhu Wanrong maintained he was innocent and was Zhong Fuhua's roommate.

In this case, there appeared to be no damage as police seized the skimming devices before the criminals returned to China.

Such devices could copy data from 200 electronic cards per day and the data could be used in withdrawing money from anywhere in the world, he said.

He urged the public not to panic as bank officials would check |and immediately suspend any |suspicious transactions.