The customs department has recently launched a series of operations against cross-border smuggling near Sha Chau.

Three customs officers in a crew of five were killed when their boat capsized on Tuesday night in an incident near Hong Kong International Airport.

Emergency personnel were deployed for a rescue operation after receiving a call shortly before 9.15pm. The boat had rammed an unknown object, an informant told police.

Chief Executive Carrie Lam Cheng Yuet-ngor, who is on a duty visit in Switzerland, issued a statement overnight expressing her shock and sadness.

"I am profoundly grieved at the unfortunate loss of three Customs colleagues who were on duty last night and I offer my deepest condolences to their families," she said.

In a media briefing at about 1.30am on Wednesday, the Fire Services Department said it had sent 72 firefighters and rescuers to the scene after receiving a report at 9.14pm on Tuesday.

The first group arrived 29 minutes after the crash and within minutes located three customs officers trapped inside the cabin. They were later pronounced dead in hospital.

"Our colleagues did not see any floating objects at the scene, so we don't know the reason for the boat turning over," the department's marine and diving division commander Yiu Men-yeung said.

He said the customs officers were wearing life jackets.

Customs assistant commander Chan Tsz-tat said the vessel, which had been in use since 2016 and was last inspected in March last year, was on an anti-smuggling patrol and left the Stonecutters Island station after 6pm.

"We are pained by the tragic incident that led to three customs officers losing their lives, the customs department will provide all viable assistance to the families," he said. 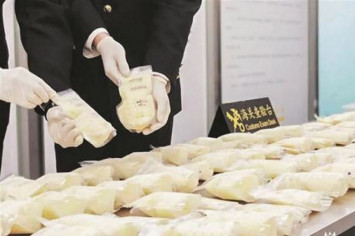 There were four males and a female officer, aged 27 to 43, on the vessel, Chan added. The two survivors had been taken to North Lantau Hospital in Tung Chung.

Chief Secretary Matthew Cheung Kin-chung visited relatives of the victims in hospital at around 2am on Wednesday, alongside Secretary for Security John Lee Ka-chiu and Commissioner of Customs and Excise Hermes Tang Yi-hoi.

"We have contacted the three families and I promise we will make every effort to support them," Cheung said, as he praised their bravery and dedication to their jobs.

Lee added they saw on the vessel what appeared to be damage from a crash. Police have been investigating the cause of the incident. 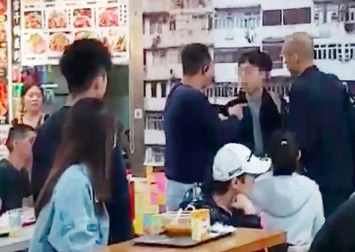 On Friday, customs officers foiled a cross-border smuggling case with the arrest of 30 men and seizure of 146 tonnes of frozen meat worth HK$5.1 million (S$885,731) after intercepting eight vessels including fishing boats and barges off Lung Kwu Chau.

The department recently launched a series of operations near Sha Chau - to the south of the runway - to fight cross-border smuggling activities in which fishing boats and cargo vessels were used to ship frozen meat from Hong Kong into mainland China, according to the source.