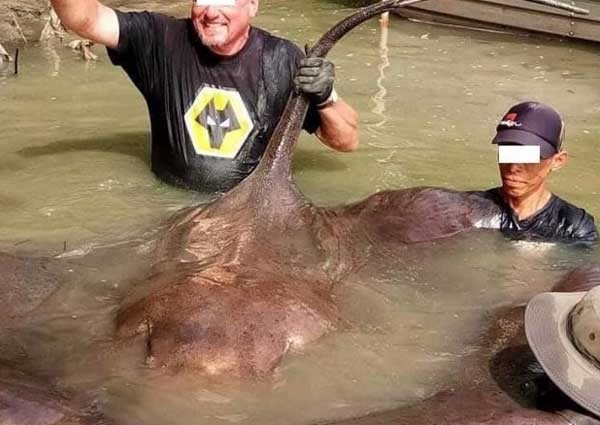 Four suspects have been arrested for allegedly helping foreign tourists catch rare giant freshwater stingrays in Samut Songkhram. Provincial regulations forbid catching the fish unless it is for research purposes.

The suspects were arrested on Monday after the officers from relevant agencies in Amphawa District investigated reports from local people who saw live broadcasts on Facebook.

He said the people at Samut Songkhram cherish and want to save the endangered giant freshwater stingray.

The four men did not have a valid boat driving licence, the boat was not registered with the Marine Department, and there was illegal fishing equipment on the boat, police said.

Three of them had traces of amphetamine in their urine.

One of the suspects said that they were hired by another man called "Boy" to organise the fishing trip for foreign tourists to catch giant freshwater stingray.

They claimed that they had permission to catch the stingray for research purposes.

However, officers found that the permission that the suspects claimed they had expired in November 2016.