At least four children belonging to two of the three families behind the string of bombings in Surabaya and Sidoarjo, East Java, on Sunday and Monday, became orphans after their parents were killed in the explosions.

In the blast at the Wonocolo low-cost apartments (Rusunawa) in Sidoarjo, AR and two of his younger siblings, FS, 11, and GA, 10, lost their father Anton Ferdiantono, mother Puspitasari and eldest brother HR, 17.

Anton apparently mishandled highly sensitive explosive triacetone triperoxide (TATP) and triggered an explosion that instantly claimed the lives of Puspitasari and HR. Anton died later after police officers gunned him down to prevent him from triggering another bomb. Police believe that the TATP explosives were going to be used by Anton, who was later known as a member of terror network Jamaah Ansharud Daulah (JAD), to launch another attack in the city.

The youngest in Anton's family, GA, will have to undergo intensive medical treatment at the Bhayangkara Ngagel Hospital for burns. 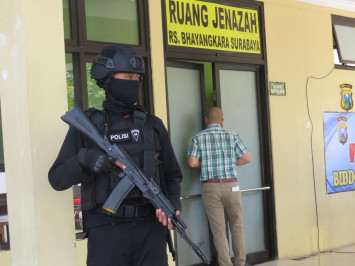 Like AR, FS, and GA, who suddenly became orphans, Ais, 8, the daughter of alleged suicide bomber Tri Murtiono, 50, also lost parents and two brothers during the suicide attack that involved two motorcycles at the Surabaya Police headquarters on Monday. Tri, his wife Tri Ernawati, 43, and their other sons, MDA, 16, and MDS, 14, died instantly in the motorcycle bombing. Luckily, Ais survived the blast and was saved by a police officer who happened to be close to the blast site. She was rushed to the nearest hospital to receive treatment.

Tito said it was the first time that terrorists in Indonesia had taken along children in their suicide bombings.

“In Syria, [terror network] the Islamic State has used children several times in their attacks,” Tito told reporters in the press conference. “But, this is the first time it happened in Indonesia.”

East Java Police have reportedly asked for a helping hand from several psychiatrists to assist the orphaned children in dealing with their psychological trauma.

In the suicide bombings on three churches in Surabaya on Sunday, an entire family of six were killed. The suicide bombers are identified as Dita Oepriyanto and wife Puji Kuswati, along with four children, YF, 18, FH, 16, FS, 12, and PR, 9. Dita is known as the JAD leader of the Surabaya chapter.

At least 25 people died and 55 others were wounded in the bombings in Surabaya and Sidoarjo.

The Islamic State group has claimed responsibility for the suicide attacks, it said via its propaganda agency Amaq.

The group has also claimed responsibility for the riot at the National Police's Mobile Brigade headquarters (Mako Brimob) in Depok, West Java, which led to the deaths of five members of the police’s elite counterterrorism squad, Densus 88, and a 36-hour standoff between terror inmates and security forces.