In a handout photo, customs officers in Hong Kong pose with examples of illegal copies of branded products from Nike and Under Armour, which were seized during a raid in Mong Kok.

Four women were arrested and HK$4 million (S$696,000) worth of counterfeit goods seized as customs officers closed down hawker stalls suspected of selling fakes to tourists at the Ladies' Market in Hong Kong.

Officers raided three stands at the attraction in Tung Choi Street, Mong Kok, and two nearby flats used for storage on Tuesday, customs said on Thursday.

Jacky Tsang Kin-bon, of Customs' intellectual property general investigation division, said the haul of 9,400 items was made up of illegal copies of 20 famous brands, including handbags, wallets and leather belts, and had a street value of HK$4 million.

"Investigation showed they [the sellers] had been in operation for about two months," he said.

"No counterfeit products were on display in the hawker stalls in an attempt to avoid our detection."

The suspects only targeted certain tourists with the counterfeits and did not approach locals or mainland Chinese visitors in a bid to evade arrest.

According to the Customs and Excise Department, the fakes were brought to the stalls from the stash houses after confirming the sale with buyers.

Senior inspector Yau Him-shun, of the same division, said each of the counterfeit products were sold for between HK$250 and HK$1,500, with prices ranging from three to 15 per cent of what would be charged for genuine goods.

Customs officers are investigating the source of the fakes and whether the same syndicate was behind the hawker stalls.

Read Also
Hong Kong customs seizes fakes of Nike and Adidas trainers selling for up to $1,400 a pair 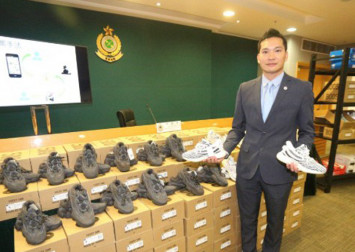 Tsang said it was part of a citywide anti-counterfeiting operation that began last week.

He said customs officers would step up patrol and enhance enforcement against counterfeiting activities across the city ahead of Lunar New Year.

In Hong Kong, selling or possessing counterfeit goods for sale carries a maximum penalty of five years in jail and a HK$500,000 fine.