4.2 million in Indonesia seen heading to their hometowns for holiday 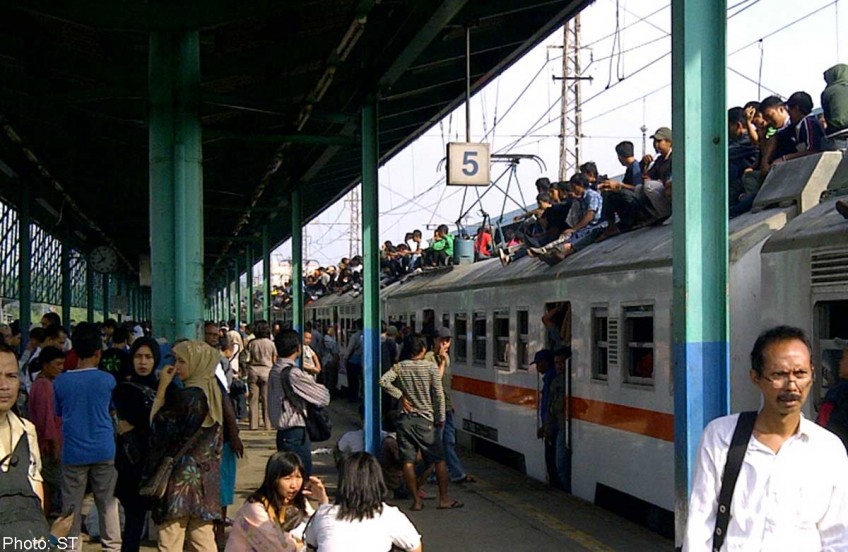 Passengers riding on the roof of a train at the Manggarai Station, Jakarta.

JAKARTA - The city will be quieting down in the coming days, as around 4.2 million people are expected to head back to their hometowns for the annual exodus for Idul Fitri, predicted to fall between July 27 and 29.

Jakarta Transportation Agency head Muhammad Akbar told reporters on Tuesday that the agency estimated that 4.2 million Jakartans would travel during the annual exodus, an increase of 13.5 per cent from last year's 3.7 million.

"About 63 per cent of Jakartans will use public transportation such as buses, trains, planes and ships, while only 47 per cent or around 1.2 million are predicted to use cars or motorcycles," he said.

Akbar said the number of Idul Fitri travelers using public transportation would increase by around 9 per cent, from 2.4 million in 2013 to 2.6 million this year," he said.

He added that the number of intercity and interprovincial buses would decrease by around 7 per cent, as demand for the modes was dropping.

"We also can provide 43 tow cars and 12 ships," he said, adding that the personnel would also be equipped with 123 portable traffic signs to be used in congested areas.

The Jakarta Health Agency plans to provide 43 first aid posts at stations, terminals and ports to prepare for the crowds during the annual exodus, locally known as mudik.

Health Agency head Dien Emmawati said on Tuesday that her agency would deploy a team of four workers, comprising a doctor, nurse, driver and pharmacist, to work one shift for seven days after and before the holidays.

"For big bus terminals like Kalideres in West Jakarta and Kampung Rambutan in East Jakarta, medics will be there around the clock," she said.

Dien said common ailments during the exodus ranged from respiratory ailments to colds and indigestion.

She further said the hired drivers had undergone examinations to ensure that they were in good health and that they did not consume alcohol or drugs.

She added the agency would also build posts at tourist sites, specifically on the Thousand Islands. "The number of visitors to the islands usually increase significantly during the Idul Fitri holidays," she said.

The Transportation Ministry in Jakarta is offering free transportation for people who register at the office between July 1 and 16.

The ministry said that it would accommodate 27,100 people and 17,100 motorcycles on buses, trucks, trains and ships.

The trains will serve the Jakarta-Semarang and Jakarta-Cirebon routes, while buses will serve nine routes to various cities in Java such as Wonogiri, Magelang, Cilacap and Surakarta in Central Java.