The captured crocodile in Tawau.

KOTA KINABALU - A crocodile which was believed to have killed an Indonesian man at Sungai Pang Burong in Tawau district last April has finally been captured.

"Finally on Sunday (May 12), the crocodile which we believe was responsible for the attack went into one of the traps set up and was captured at about 8.30am," he said.

He said the 500kg reptile which measures over 4m in length is not the only crocodile that roams the river.

Read Also
Chinese zoo asks tourists not to feed cash to its animals after visitor throws $2,030 to giraffes 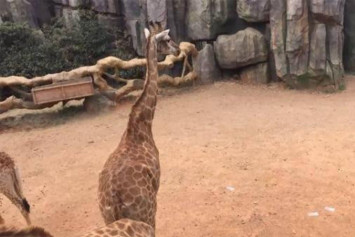 "There are many other cases of crocodile attacks and we hope to get them captured soon," Sailun said.

He said traps will still be left along the river as a precautionary measure.

In the April 24 incident, the victim Zainuddin Bedda was foraging for vegetables along the river when he was attacked by a crocodile.

He was later found dead not far from the area.