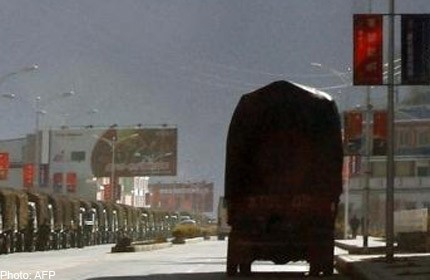 A driver and five relatives were killed on Saturday as they returned to Sichuan from a trip to Xi'an in Shaanxi province.

The tragedy was one of a series of accidents that cast a shadow over the National Day holiday week in Sichuan.

The driver, Guo Meimei, who worked at a rural clinic in Weiyuan, a county in the city of Neijiang, and her passengers died when their minibus was hit from behind by a large truck, pushing the vehicle under a trailer truck in front.

The accident happened as the minibus approached a toll gate on the Mianyang-Guangyuan Expressway in Sichuan.

All six were trapped in the minibus. Police managed to free them, but they were declared dead, West China Metropolitan News reported.

The six victims were from three families - the mother and daughter, a father and son and a husband and wife, the report said.

The driver of the truck which hit the minibus fled after the accident, but police caught him next day.

The newspaper said the tragedy was one of a series of road accidents reported in Sichuan over the holiday.

On Sunday, three people died and five were injured when five vehicles were involved in a chain collision on the Yibin-Luzhou section of the Chengdu-Chongqing Expressway.