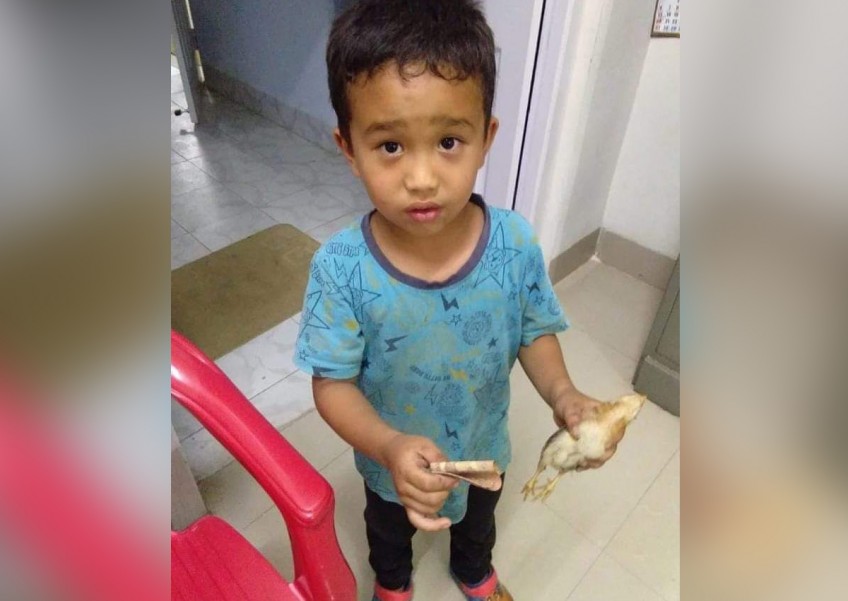 An innocent 6-year-old boy was found sobbing at the hospital when he rushed to bring in a dead chick he had accidentally run over with his bicycle.

Wide-eyed Derek C Lalchhanhima from Sairang, India was captured holding a dead chick in one hand and a 10-rupee bill ($0.20) in the other, in a photo that touched the hearts of netizens last Tuesday.

A certain Sanga Says posted the photo with the caption: "This young boy from Sairang, Mizoram, accidentally ran over his neighbour's chicken. He took the chicken, ran to a nearby hospital and with all the money he had, asked for help,"

Derek's father, Dhiraj Chhetri, narrated that the boy came home holding the neighbour's chick, begging his parents to take it to the hospital. According to The News Mill, when Chhetri told the little boy to go by himself, the boy left with the dead chick and a 10-rupee bill.

The boy then came back from the hospital, sobbing as the medical practitioners did not help but took a photo of him instead - the photo now being circulated on Facebook.

When he vowed to help the lifeless chick by going back to the hospital with more money, his parents had to explain to him that the chick was dead and the hospital could not revive it.

Derek's father said that he was surprised by his son's act of compassion and did not expect the child to gain widespread attention, although he acknowledges that his son has "always been a rather unique kid."