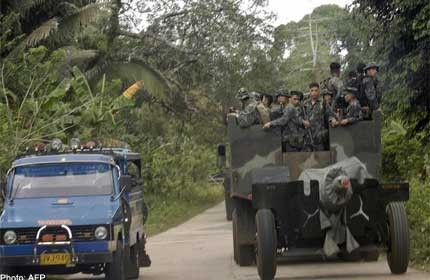 MANILA - Seven people were killed when communist insurgents attacked a rural army outpost in the southern Philippines, the military said on Saturday.

Six rebels and a pro-government militiaman were killed while another militiaman was wounded during the five-hour gunbattle on Friday, said the military, adding the attack only ended after they deployed helicopter gunships.

Around 60 fighters of the New People's Army (NPA) attacked the outpost on the southern island of Mindanao in an effort to capture the base, said military spokesman Lieutenant Colonel Ramon Zagala.

"Their objective was to overrun the detachment and get the firearms and ammunition for themselves," he told AFP.

Two MG-520 attack helicopters were sent to drive back the guerrillas, he said.

This is part of an insurgent strategy of using large-scale attacks to capture remote and vulnerable outposts, Zagala said.

"They have increased their tactical offensives and we were expecting that.

These violent acts are to show they are still a force to be reckoned with," he added.

The rebels have usually operated in small units, extorting money from rural businesses and staging piecemeal attacks on government targets.

The NPA has been waging a 44-year Maoist armed campaign that has claimed at least 30,000 lives. The military estimates the guerrillas' ranks at about 4,000 fighters, down from a peak of roughly 26,000 in the 1980s.

The government of President Benigno Aquino had opened peace talks aimed at ending the communist insurgency before his term expires in 2016.

But negotiations collapsed in April and last month the chief government negotiator resigned, citing his frustration with the stalled talks.