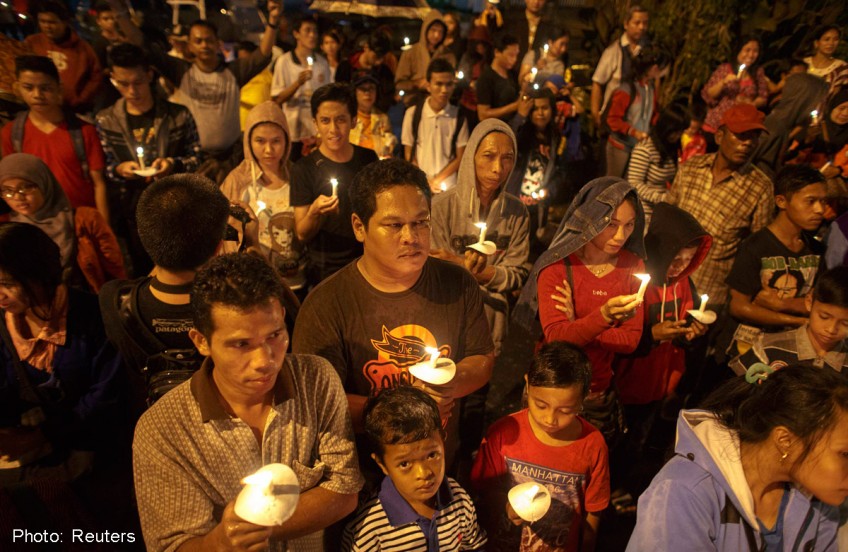 Indonesians hold up candles during a candle light vigil for the victims of AirAsia flight QZ8501 at Surabaya December 31, 2014.

The National Search and Rescue Agency (Basarnas) chief, Air Chief Marshal FH Bambang Soelistyo, says that as of the fifth day of the joint search and rescue (SAR) operation, the mission has recovered nine bodies from AirAsia flight QZ8501, which crashed into the waters off Pangkalan Bun, Central Kalimantan.

"By Thursday evening, we had recovered nine bodies in total; six have been sent to Surabaya [East Java], two are still in Pangkalan Bun, and one is still on KRI [warship] Yos Sudarso," Bambang told the press at Basarnas headquarters in Central Jakarta on Thursday.

He said that the team had also recovered a number of items belonging to passengers and the aircraft, such as two black bags, one grey suitcase, an aircraft ladder and metal debris.

"We dispatched 19 ships, including ships from foreign countries like Malaysia and Singapore, and nine planes for the SAR operations today," he said.

The team had suspended operations for Thursday by 7 p.m. and will continue on Friday morning.

He said that the joint team would be using newly arrived equipment from Singapore to detect objects on the ocean floor on Friday, as well as a surveillance vessel from the Indonesian Association of Sea Surveillance Contractors (AKSLI).

The equipment from Singapore would be available in the SAR area in the Java Sea by 2 a.m. Friday, he said.

"The [Agency for the Assessment and Application of Technology - BPPT's] Baruna Jaya research vessel has joined the operation now," he said, adding that ships from the US would also join the search on Friday.