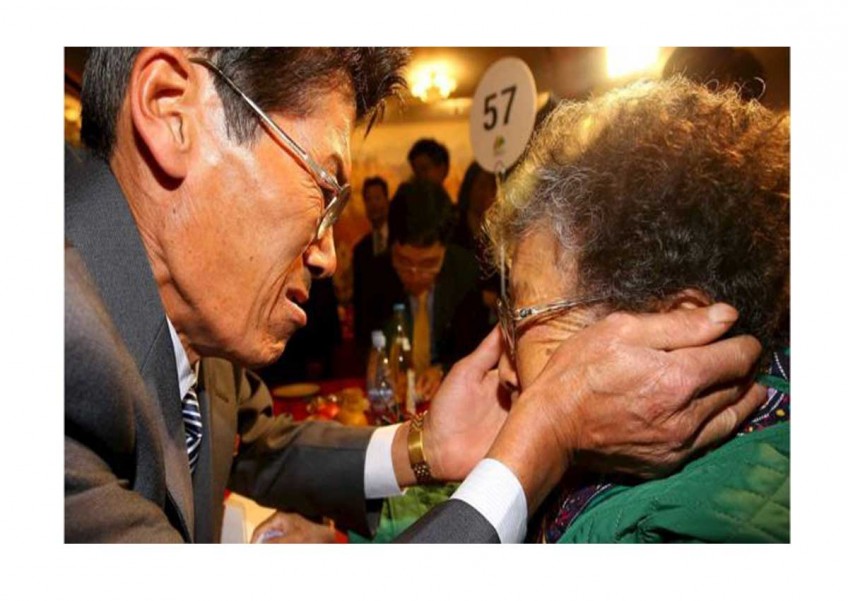 Jeong Geon-mok (left) from North Korea wipes the tears from his South Korean mother Lee Bok-sun’s face during the second round of family reunions at Geumgangsan Hotel in North Korea on Saturday.
Reuters

MOUNT GEUMGANGSAN, North Korea - Despite more than 40 years of separation, it took Jeong Geon-mok, 64, from North Korea just seconds to recognise her frail, gray-haired mother in a wheelchair as the second round of reunions of separated families began Saturday.

Right after entering the venue for the reunions at the mountain resort, Jeong ran toward his 88-year-old mother Lee Bok-sun and held her in his arms with teary eyes. Unlike other families divided after the 1950-53 Korean War, his family was separated when he was abducted by Pyongyang in 1972.

"We are finally able to meet here like this because we are both alive," Jeong said as he wiped away tears streaming down his mother's face during the group reunion session. At Geumgangsan Hotel, 254 people of 90 families from the South met with their loved ones in the North.

"Look at me … how healthy I am," he added, trying to calm her down.

Jeong and 24 other fishing crewmen were kidnapped by the North in 1972 when their Odaeyang 61 and Odaeyang 62 trawlers were seized by the North's patrol ships in the West Sea. The Seoul authorities put the number of those held in the North since the end of the war at some 500.

"Our (Workers') Party accepted him as a member, and he has also become an innovative factory worker. We have no problems at all," she said. "You don't need to worry. He has not been discriminated against just because he came from the South."

On Sunday, there were individual reunions, a joint lunch session and another group reunions. A total of 188 North Korean participants joined the reunions.

"I am so happy, and happy," said Lee Geum-seok, 93, from the South, during lunch with her 74-year-old son after individual meetings in a hotel room.

"Don't cry, mother. Don't cry," Ri Mi-ryeol, Lee's daughter-in-law, said as her husband, choking up with tears, could not speak.

During the individual gatherings, North and South Korean participants exchanged gifts that could be the first and last, unless the two Koreas achieve reunification.

North Koreans gave their South Korean relatives shopping bags with their country's traditional products, including liquor. The items appeared to have been provided by North Korean government authorities.

South Korean participants brought thick coats, medicine, undergarments, toothpaste and other basic commodities, thinking those items would be hard to get in the impoverished state under longstanding sanctions over its nuclear and missile development.

The second round of reunions will run until Monday.