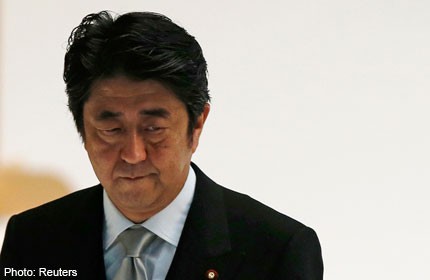 Japan's Prime Minister Shinzo Abe attends a memorial service ceremony marking the 68th anniversary of Japan's defeat in World War Two, at Budokan Hall in Tokyo on August 15, 2013.
By forgoing a visit to Yasukuni Shrine on Thursday, Prime Minister Shinzo Abe appeared to demonstrate that his administration has no intention of making the visit a diplomatic issue and aims to mend ties with China and South Korea.

However, many government officials said Abe is still thinking about visiting the shrine during its autumn or spring festival.

Abe sent a ritual offering to the shrine at his own expense and in his capacity as Liberal Democratic Party president on Thursday, the 68th anniversary of the end of World War II. Koichi Hagiuda, an LDP member and a special aide to Abe, made a visit and the offering on his behalf.

"I had a token of my respect offered [to the shrine] with gratitude and respect to the souls of the war dead, who fought for the sake of this nation and sacrificed their precious lives," Abe told reporters at the Prime Minister's Office on Thursday morning.

Three Cabinet members paid their respects to the war dead at Yasukuni Shrine in Tokyo on the same day. Internal Affairs and Communications Minister Yoshitaka Shindo and National Public Safety Commission Chairman Keiji Furuya visited the shrine in the morning and Tomomi Inada, minister in charge of administrative reform, made her visit in the afternoon.

Abe adopted an ambiguous strategy of not stating whether he would visit the shrine. According to officials close to him, Abe intended to signal to China and South Korea that he took their views into consideration by hinting at a visit until the last minute, but forgoing the visit in the end.

The officials said Abe apparently believed it would give him a foothold to improve future ties with China and South Korea.

It seems that Abe tried to avoid further deterioration of the nation's relationships with China and South Korea, which could hinder recovery of Japan's economy, the administration's top priority.

On Thursday, Chinese Vice Foreign Minister Liu Zhenmin summoned Japanese Ambassador to China Masato Kitera and protested the Cabinet ministers' visits to Yasukuni Shrine. In addition, Chinese Foreign Ministry Spokesperson Hong Lei issued a statement saying, "No matter in what form and capacity Japanese leaders pay homage at Yasukuni Shrine, it is essentially an attempt to deny and whitewash the history of invasion brought about by Japanese militarism."

The Chinese government hinted that it would see Abe's making a ritual offering as a problematic move in itself. In its Thursday issue, the People's Daily, the official mouthpiece of the Chinese Communist Party, published an opinion piece by a scholar who said that making a ritual offering is a "roundabout visit" to the shrine, despite the fact that Abe did not go in person.

The Chinese government has called for Japan's prime minister, foreign minister and chief cabinet secretary to refrain from visiting Yasukuni Shrine. China's angry response to the recent shrine visits by other Cabinet members and to the prime minister's ritual offering is considered unusual, as it suggests that Beijing is asserting its own views on Japan.

However, some observers said Abe thinks it odd that his visit to Yasukuni Shrine is seen as problematic by other countries. When asked by reporters if he would visit the shrine in the future, he said, "I'm not going to answer the question as that in itself would turn into a political and diplomatic issue."

In an address he delivered at a national memorial service held Thursday, Abe did not use the phrase "Japan caused tremendous damage and suffering to people in Asia," which has been included in previous prime ministers' speeches.

"It doesn't mean he denies the nation's responsibility for the damage it caused in the last war, but it reflects his wish not to make a Yasukuni visit a political and diplomatic issue," a government official close to Abe said.

Although the United States has not clarified its official position concerning the prime minister's visit to Yasukuni Shrine, it was concerned about further deterioration of Japan's relationships with China and South Korea.

A senior US government official said Abe's visit to Yasukuni is undesirable if it causes friction with neighbouring countries, an understanding seemingly shared by the Japanese government.

It seems that Abe refrained from visiting the shrine from the standpoint of placing importance on the Japan-US alliance by taking the US stance on the issue into consideration.