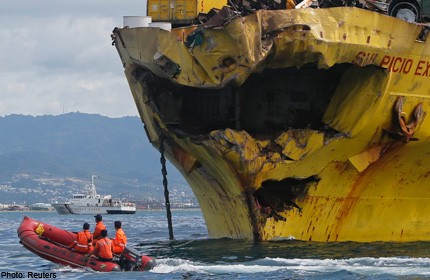 TALISAY, Philippines - As rescuers plucked more bodies from the sea after a Philippine ferry and a cargo ship collided late last week, killing at least 38 people, a vexing but familiar question faces a country plagued by an abysmal record in maritime safety: what went wrong?

Authorities say 82 people listed as missing are believed to have died, trapped in the ferry that sank to the sea floor off the central Philippine port of Cebu minutes after Friday's collision. Divers are trying to cut into the vessel, at a depth of 45 metres (150 feet), and plug an oil leak.

Although a formal investigation will not begin until after the rescue operation, attention is already turning to the final moments in the latest fatal shipping disaster to strike the Philippines, a country of 7,100 islands, where over-crowded or overloaded vessels are common and sea regulations are notoriously hard to enforce.

The MV St. Thomas of Aquinas, an inter-island ferry loaded with 870 passengers and crew, had been at sea for about nine hours after leaving Nasipit, a port on the southern Philippine island of Mindanao, when it approached Cebu, a bustling economic zone about 560 km (350 miles) south of Manila.

As they both entered a narrow channel about 600 yards (550 metres) wide in the dark at about 9 p.m., they appeared to have strayed onto the same lane from opposite sides, officials said.

Under navigational rules, both vessels must steer to the right if they are on a collision course, Commodore William Melad, head of the coast guard district in the central Visayas region, told Reuters.

Another 2GO Group official, speaking on condition of anonymity because a formal inquiry into the accident is pending, said the ferry could not veer right because the water was too shallow on that side.

"Our options were to turn right or left, but we couldn't turn right because we would hit shallow waters so we veered left," the 2GO Group official said.

Officials at Philippine Span Asia Carrier Corp, which owns the cargo ship, declined to respond to requests for comment. The vessel remains in Cebu, a gaping hole in its bow.

"We need to review whether both ships followed regulations," said Melad, the Cebu coast guard chief. "If they are approaching each other, there should be a safe distance. Otherwise, you signify intention to move to the right and the other should move to the right also, so that there won't be any collision."

Melad said the vessels' speed would also be checked for possible violation.

Tug boats typically accompany ships arriving and departing within one km (0.6 mile) from the port, but the accident happened four km (2.5 miles) out at sea, said Greg Castillo, a Cebu city councillor.

Authorities have suspended passenger and cargo shipping operations of both companies.

The cargo vessel's owners were formerly known as Sulpicio Lines Inc, which owned the MV Dona Paz ferry that collided with a tanker in the Sibuyan Sea in the country's main Luzon island region in December 1987, killing 4,375 on the ferry and 11 of the tanker's 13-man crew. That ranks as the world's worst peacetime maritime disaster.

The St. Thomas of Aquinas sank within minutes of the collision on Friday, but 750 people were rescued, mostly by fishing boats.