After Malaysia's NUG meeting, will Asean approach towards Myanmar shift?

People gather outside the Chinese Embassy as they protest against the military coup and demand the release of elected leader Aung San Suu Kyi, in Yangon, Myanmar, on Feb 11, 2021.

The recent engagement between Malaysia and Myanmar's shadow administration appeared to be a push too far for Myanmar's ruling junta, which accused the senior Asean member of supporting terrorism by holding talks with representatives of Myanmar's ousted civilian leadership.

In some of its most blunt remarks towards Malaysia, Myanmar's State Administration Council (SAC) - which was formed after the military's coup in February last year - criticised Malaysian Foreign Minister Saifuddin Abdullah for "violating international anti-terrorism agreements" by meeting the outlawed National Unity Government (NUG) on the sidelines of the US-ASEAN summit in Washington.

Saifuddin's meeting with Zing Mar Aung, his counterpart in the NUG, was a clear departure from the policy of seeking consensus among the 10 members of Asean, of which Myanmar is also a member.

But it was also not the first time Malaysia's chief diplomat had pushed the envelope in ASEAN, in response to the deadly unrest that has unfolded over the past year since the military takeover of Myanmar's government.

Last year, Saifuddin was among the leading voices that pushed to exclude political representation from Myanmar's junta at the annual Asean Summit in October, an unusually bold move by the regional bloc that typically favours non-interference in the affairs of member states.

Malaysia and Myanmar have also had rough patches in their relations over the years, particularly related to the exodus of hundreds of thousands of Rohingya refugees seeking to escape systematic oppression by Myanmar authorities and who view Malaysia as a safe haven.

This time around, Saifuddin has said that the conditions are ripe for Asean and its external partners to broaden their Myanmar outreach to at least include informal engagements with the NUG, as the junta has done little to move forward with implementation of the Asean Five-Point Consensus on the situation in Myanmar that was agreed upon a year ago.

"So since nothing moved, more people were killed, more people fled the country ... we can't wait another year so we have to be creative," Saifuddin said at a news conference after his meeting with Zing Mar Aung.

"This is why we are saying: 'Look, we have been for one year talking to the junta and nothing seems to be moving, so it's about time that we talk to the NUG even if it is in an informal way'," the minister said.

As of February, at least 1,500 people were known to have been killed during protests held since the Myanmar coup, and nearly 12,000 unlawfully detained during the same period, according to the United Nations human rights office.

Thomas Daniel, a senior fellow at the Institute of Strategic and International Studies (ISIS) Malaysia, said the decision to exclude political representation from Myanmar at last year's Asean summit was a clear sign the regional bloc was split on how to deal with the deteriorating state of conflict between the junta and its opponents.

However, the key question was how far stakeholders in the regional bloc were willing to go to push for substantive changes in the way Myanmar handles its internal strife, he said.

"Perhaps FM Saifuddin and Malaysia want to set a precedent, and to signal to both the junta and other Asean member states that a lack of meaningful progress on Myanmar is an untenable situation," Thomas said.

"If the junta wasn't prepared to meet Asean halfway, there are member states who are prepared to engage other stakeholders, even at the ministerial level." 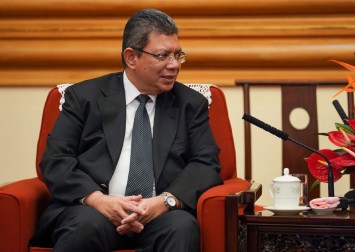 Malaysia appears to be the sole voice in Asean openly seeking broader engagement with other stakeholders in Myanmar, which the bloc may see as setting an unwelcome precedent for external interference in domestic affairs of a member state, according to Hoo Chiew Ping, senior lecturer in strategic studies and international relations at Malaysia National University.

But at the same time, Asean's failure to address Myanmar's prolonged unrest simply shows the world that it is incapable of taking bold steps to manage critical security and strategic issues, she said.

"Malaysia will be recognised for taking the right side in the eyes of the international community, but potentially risking its status within Asean as an outlier, sticking out like a sore thumb," Hoo said.

Analysts doubt that Malaysia's latest overtures are enough to nudge Asean to consider changing the way it manages crises among member states, but it does not mean nothing can be done.

Tunku Mohar Mokhtar, an analyst with the International Islamic University of Malaysia (IIUM), believed persistence was key in securing a consensus among Asean members towards engaging the NUG and other stakeholders in Myanmar.

"If Malaysia succeeds in getting a majority of Asean states to support her, then those who are against the idea of engaging the NUG would feel pressured to eventually support Malaysia's position," he said.