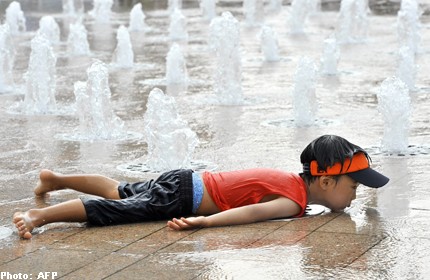 A South Korean boy lies down flat in a fountain to cool off during a heat wave in central Seoul.

The timing could hardly be worse with South Korea in the grip of an extended heatwave and temperatures nudging 34 degrees Celsius (93F). One Seoul city government employee described her office as "one big dim-sum basket".

The heatwave is also smashing records in Japan, where the mercury hit 41 degrees Celsius on Monday.

The coal-powered Dangjin III plant, with a capacity of 500 megawatts, was taken offline on Monday by mechanical issues and will likely remain shut for a week, a spokesman for the state power distributor Korea Power Exchange (KPE) said.

Technical problems also shut down the nearby Seocheon plant. Although operations resumed after an hour, the plant, also coal-fired, is only working at half its 200-megawatt capacity, the spokesman said.

The shutdowns come amid a lengthy disruption in South Korea's nuclear power sector.

"We may have to carry out a rolling blackout... if one single power plant goes out of operation," Yoon said, appealing to factories, households and shops to curb consumption over the next three days.

The last time the Seoul government was forced to resort to nationwide load shedding was in September 2011, when unexpectedly high demand pushed power reserves to their lowest level in decades.

The resulting outcry forced the then-energy minister to resign.

The government has estimated that a future power outage on a similar scale would result in economic losses of around 11 trillion won ($10 billion).

National reserves of 4.0 gigawatts are considered the minimum necessary to guarantee a steady power supply.

If they drop below 2.0 gigawatts, it triggers an automatic alert requiring all government offices to turn off air conditioners, lights and any non-essential devices.

In a pre-emptive move Monday, the energy ministry ordered such measures effective immediately, even though the key reserve mark had not been breached.

Describing the current situation as "extremely urgent", the ministry also ordered government offices to turn off water coolers and staff to use staircases where possible, rather than elevators.

The ministry added it would tighten monitoring on shopping malls, which face fines for bringing indoor temperatures below 26 degrees Celsius.

Higher than normal summer temperatures - forecast to last at least another week - have resulted in a sustained energy consumption spike.

At the same time, South Korea's nuclear industry is struggling to emerge from a mini crisis which has forced the shutdown of numerous reactors - either for repair or as the result of a scandal over forged safety certificates.

The country has 23 reactors which are meant to meet more than 30 per cent of electricity needs. Currently six reactors are out of operation.

The warnings and directives for curbing consumption have been met with public anger, with many blaming the government for failing to put adequate safeguards in place.

"This is hardly the first hot summer season we've had. What has the government been doing since last summer, or the summer before?" said one comment on a news portal carrying Monday's ministry announcement.

"Why don't they ask power-guzzling Hyundai, Samsung or LG factories to save energy, instead of squeezing the public every summer?" seethed another reader.

In Japan, the weather agency issued heat warnings for 38 of the 47 prefectures, telling people to keep hydrated and use their air conditioners.

At least nine people died from heatstroke over the weekend, Japanese officials and media reports said.

The fierce temperatures come as Tokyo's energy costs have soared after Japan shut down its nuclear reactors in the wake of the Fukushima atomic crisis two years ago.

The shutdown forced Tokyo to turn to expensive fossil-fuel alternatives to plug the gap.