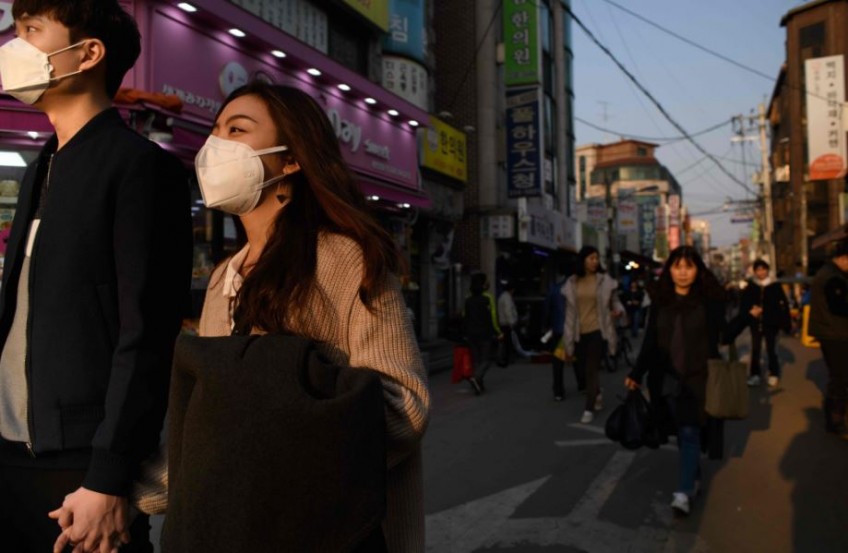 People wearing face masks walk on a street in Seoul on March 26, 2018.
AFP

The worsening level of airborne dust particles here causes more panic among South Koreans than North Korea's artillery cannons and rocket launchers lined up along the border, as they fear that air pollution is a potential health hazard, according to a report released by the Korea Institute for Health and Social Affairs.

The report, which surveyed 3,839 adults last year, indicates that air pollution was the No. 1 source of concern for South Koreans. It scored 3.46 points out of 5, the highest in the survey, among other sources of concern.

Economic stagnation came in second with 3.38 points, followed by the aging population and water pollution with 3.31 and 3.29 points, respectively. The threat from North Korea's nuclear programme marked 3.26 points, just above natural disasters, like floods and typhoons, which marked one of the lowest scores.

The report suggests that South Koreans "regard environmental problems as more relevant to their everyday lives" than issues related to North Korea or natural disasters.

Air pollution is already a greater threat to people than a nuclear war that few believe will actually occur, according to Seoul residents interviewed by The Korea Herald.

"I'm directly breathing this toxic, polluted air on my way to work and home every day, knowing that it will cause me all sorts of diseases in the next decade, like lung cancer and inflammation in the brain if we don't stop it now," Kim Jae-yeong, 34, an office worker in Seoul, told The Korea Herald.

Seoul and other metropolitan cities often see the daily average of airborne particulate matter hitting "extremely bad" levels, which the World Health Organisation categorizes as harmful as the particles can penetrate the respiratory system, especially in children and the elderly.

Earlier in March, the Ministry of Culture, Sports and Tourism announced plans to spend 6.4 billion won ($6 million) to build virtual sports facilities at 178 elementary schools this year, as more children are forced to stay indoors during scheduled physical education classes when the air quality is bad.

Last month, several baseball games were cancelled in Seoul as the concentration levels of particulate matter reached over 370 micrograms per cubic meter in some parts of the capital.

President Moon Jae-in has raised concerns about air pollution originating from China during his talks with Chinese special envoy Yang Jiechi on March 30, urging the Chinese government to do more to improve air quality.

Another Seoul resident, Lim Won-joo, 29, speculated that North Korea's nuclear weapons are just a negotiating card vis-a-vis South Korea and the US, and do not pose a threat, therefore causing her far less concern than fine airborne dust particles.

"The Moon administration is doing just fine to offer incentives for Kim to negotiate away his weapons. But why is the government seemingly so incompetent when it comes to measures to stop fine dust sweeping in from China?" Lim said.

"It seems the government has virtually no other ways to safeguard citizens from hazardous toxins in the air than to provide free masks," Lim added.

The reason for the public's rising concerns about air pollution and their lack of trust in the government on the issue is "deeply complex," according to Lee Byung-chul, Seoul Metropolitan Government's official in charge of formulating the city's policy to tackle air-pollution.

"The worsening air pollution is such a serious issue here that how to tackle the problem was a major focus among presidential candidates at last year's presidential campaign. But citizens claim the government tries to downsize China's share of responsibility in causing air pollution, avoiding confronting the Chinese government because it can be a politically complex issue," Lee said.

According to the government and Seoul city data, around half of the polluted air here comes from China.

"Apart from finding out the source of air pollution, the government has been strengthening bilateral collaboration between the two countries on the environment and public health, which is equally important to gaining public trust and coming up with effective solutions," Lee added.