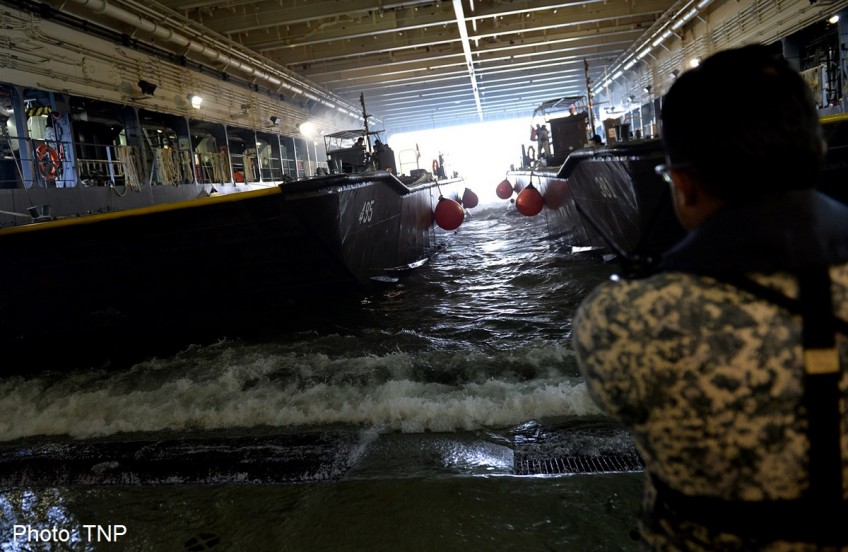 The submarine support and rescue vessel - carrying 35 navy personnel - arrived at its search zone after sailing for 43 hours. It was originally expected to get there at about 8pm on Wednesday.

It is the fourth Republic of Singapore Navy search and rescue ship to arrive at the search area south of Borneo, where the Airbus A320-200 is believed to have crashed on Sunday.

Waves the height of 1.5m and wind speeds of 20 knots greeted the vessel in an area under a mass of rain clouds.

Search teams have detected a large, dark object on the ocean floor - lying 30m to 50m deep - but choppy waters have prevented divers or remotely operated vehicles from investigating it.

Senior Lieutenant-Colonel Chow Khim Chong, who is in charge of underwater search operations on the Singaporean ships, said: "We have to listen harder for the black box's signals. The rain will introduce ambient noise into the receiver. Water temperatures will also affect the search radius."

Furthermore, surface visibility was only at one nautical mile, which means the ship has to "exercise caution in moving forward".

The MV Swift Rescue is moving "in a patterned manner without gaps" in localised areas in the Java Sea before moving on to others. If it detects a possible signal, Senior Lt-Col Chow will try to ascertain its location before sending the remotely operated vehicle to confirm it. Weather and sea conditions are set to worsen today, with waves of up to 4m predicted.

Meanwhile, Defence Minister Ng Eng Hen wrote in a Facebook post yesterday: "RSN servicemen on board RSS Valour, the corvette, recovered some pieces of equipment and debris that were from QZ8501. The search effort continues and I know our servicemen and women are putting in their best efforts."

This article was first published on January 2, 2015.
Get a copy of The Straits Times or go to straitstimes.com for more stories.