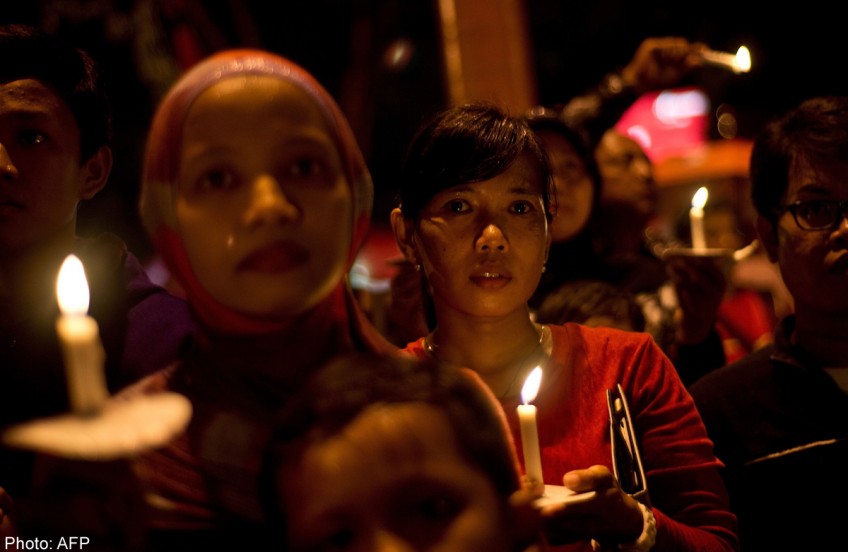 Indonesians gather to hold a candlelight vigil for the victims of ill-fated Malaysian air carrier AirAsia flight QZ8501 in Surabaya on December 31, 2014.

SURABAYA: For two nights, Indah Winata had been praying for divine intervention in recovering the aircraft of Indonesia AirAsia Flight QZ8501 that vanished off the radar screen on Sunday.

A day later, on Tuesday, the debris of the ill-fated jet and the first bodies were spotted near Pangkalan Bun in Kalimantan province although that was not what she had hoped for.

"But my prayers (to find the airplane) have been answered.

"Now, we just leave everything to God," she told reporters at Juanda International Airport here yesterday.

Indah, 43, said her sister-in-law Megawati, together with her brother-in-law Tony Linaksta and their two daughters, were on their way to Singapore for a holiday when the tragedy struck.

"The last time I saw them was on Dec 6 during a wedding here. I just hope that we can find closure to this as soon as possible," she said.

Earlier, Indah attended a special prayer with other affected family members, who were mostly of Chinese descent, at the airport's international lounge, praying and singing while consoling each other.