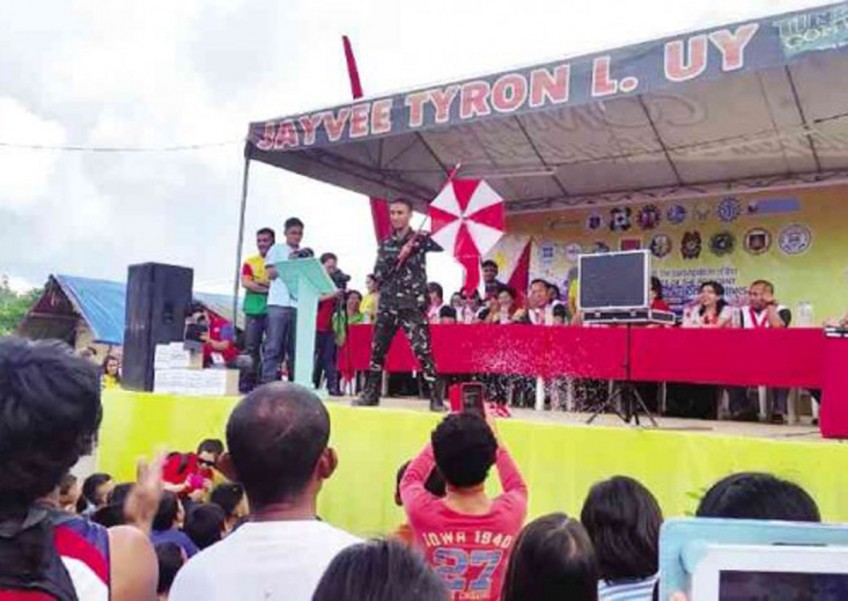 COMPOSTELA VALLEY, Philippines - If he could pull peace out of his combat boots, Pfc. Francis Carlo Travenio of the Philippine Army would gladly do so.

But as it is, the part-time magician could only pull out kerchiefs that magically turn into red canes or release doves from a parasol, before a transfixed crowd of children amazed at the sight of a military man offering entertainment instead of striking fear in the community.

"I want people to feel comfortable in the military's presence," Travenio said of his well-applauded show at the multiagency "Serbisyo Caravan" for the Mandaya indigenous folk. "It's so the kids won't be scared to approach us," he added.

A favourite act that held the children-and adults-in thrall was this magician's trick of turning kerchiefs into various objects with a wave of his hand.

Waving three kerchiefs vigorously onstage, Travenio paused to pull another handkerchief from his combat boots. Then with a quick movement of his hands, he transformed the cloth into a red cane, drawing oohhs and aahhs from his young audience.

Then with a quick move of the hand, he turned another kerchief into a small umbrella before the amazed crowd.

Travenio ended his show with a bow and a shower of candies that had even the other soldiers in the audience giving him vigorous applause.

Not his childhood dream

Performing before a young audience has become part of his duties, said this soldier of eight years. His show before the Mandaya people was his 10th since officials of the 701st Infantry Brigade, to which he belongs, noticed his special talent, learned, he said, from watching YouTube videos of magic tricks.

But becoming a part-time magician was not his childhood dream, said this Tagum City native.

"I thought of this only when I joined the military," Travenio said, adding that he wanted to appeal to children who would flee upon seeing soldiers.

"I wanted to change that," he added.

Travenio believes his show could help win the hearts and minds of children in insurgency-affected areas like Compostela Valley and other areas in Davao.

The Mandaya children in his audience, who belong to the largest indigenous group in Davao, are perennially caught in the cross fire between the military and the New People's Army. With the Serbisyo Caravan, the government hopes to bring social services to the doorstep of the Mandaya folk and win back their trust.

"This shows the soft side of the military. It's a change of pace for us, too," Travenio said.

But despite succeeding in improving the image of the military in the community and earning the approval of his commanding officers, Travenio said he still spends his own money for his magic shows.

Not that he minds. "I buy my paraphernalia from a magic shop," he said.

He also considers performing magic tricks as a rehearsal for life after a military career, said Travenio.

"I've been doing administrative work for several years now," he said. "(But) if I were to leave the military early or retire, I would consider doing magic shows as a business."