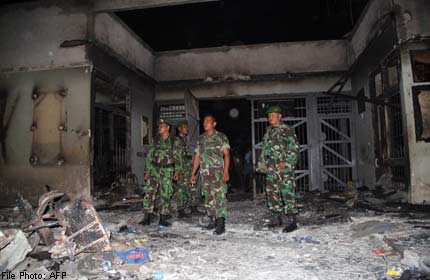 INDONESIA - More chaos has taken place at a prison in North Sumatra, this time thousands of inmates have set fire to the Labuhan Ruku prison in Batubara regency following violent conflicts with prison guards.

So far no casualties have been reported but 30 inmates reportedly escaped from the prison during the chaos.

Head of the North Sumatra Law and Human Rights ministry office Budi Sulaksana said he received the news at around 5 p.m. and until right now the prison authorities had yet to regain control of the prison.

"We have sought for assistance from the police and the mobile brigade squad but are still struggling to restore order," he said on Sunday.

He said that most of the inmates inside were still resisting the authorities and therefore it would need more time to take control.

Prison chief warden Sutopo Berutu, who was on site, said that the brawl originated from a personal conflict between a prison guard and some inmates. The angry inmates hit the prison guards and it was spontaneously followed by dozens of other inmates.

"We are still looking for more information on how the incident started," he said.

Like most of Indonesia's densely populated prisons, the Labuhan Ruku prison currently houses 874 inmates, most of them convicted in relation to narcotics, while its initial capacity is only for 251 inmates.

Many believe that the over capacity situation inside the prisons has often triggered conflicts and that is why it is strongly suggested that the government look for a breakthrough that would to solve the overcapacity problem.

Law and Human Rights Minister Amir Syamsudin had earlier proposed that narcotics users should be exzempt from prison sentences. He said rehabilitation places were more appropriate for these drug addicts.