Anti-cheating hats will not be used again: Thai university promises 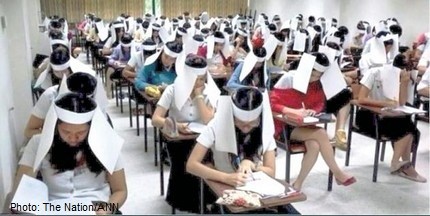 Nearly 100 students at Kasetsart University wore an anti-cheating hat while taking exams, which caused an uproar.

Kasetsart University's Faculty of Agro-Industry has promised not to use the much-criticised anti-cheating hats in its exam room again, but officials insisted yesterday that the paper hats were introduced with the intent of promoting honesty.

"Since people have criticised us, saying the hat is not appropriate, we will not use it again," faculty dean Tanaboon Sajja-anantakul said at a press conference.

The hat was made with sheets of A4 paper to cover both sides of the student's face, making it difficult for him or her to glance at a neighbour's test.

According to Tanaboon, this hat was used on some 90 students just once when they sat an exam on Textile Testing. The students and their lecturer Nattadol Rungruangkitkrai had mutually agreed to try and stop cheating, and hence invented the hat.

"I want to inculcate ethical behaviour and honesty in my students. So, I emphasised that those who cheat in exams will be punished and asked my students to propose how they can prevent the cheating," Nattadol said, adding that his students then proposed that they wear a paper box or paper hat.

"We finally agreed on the paper hat, and the students found it fun," he said.

Nattadol said he took a photo of his students wearing the anti-cheating hats and posted it on the timeline of a closed Facebook group.

The faculty dean added that the photograph somehow found its way to the public sphere and criticism followed.

"I am so sad and stressed out," Nattadol said, referring to widespread comments that his university had such a bad problem with cheating that such a hat had to be created. The lecturer insisted that his students were honest and disciplined.

Chanantorn Jiravejdechacharn, one of the students, said she was also saddened by comments in which the students wearing the hat were described as being submissive, oppressed or cheats.

"In fact, we found that the hat helped us concentrate better," she said, adding that she understood her lecturer's good intentions.

However, she said, if people deemed this hat inappropriate, she would not wear it again.

Tanaboon said his faculty would not punish Nattadol for the uproar caused by the hats. "He has been under a lot of stress already and has already been faced with derision," the dean said.