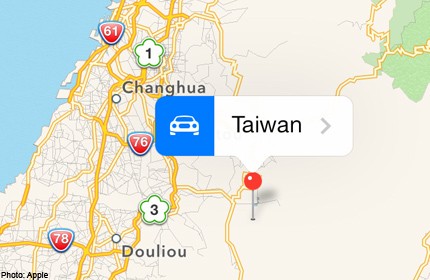 TAIPEI - US-based Apple Inc. has corrected elements on the interface of its latest mapping application that implied that Taiwan was part of China, the Ministry of Foreign Affairs (MOFA) said yesterday.

Local media recently found that in the iOS 7 iteration of Apple's mapping service programme, Taiwan was designated as a province of China.

Moreover, if one searched for "Taiwan" in the Chinese-language version of the mapping application, results would display "Taiwan, Province of China" written in simplified Chinese.

MOFA spokeswoman Anna Kao said yesterday that Taiwan's representative in the US had lodged a protest to the company as soon as it has learned of the mapping system problem that was seen to have degraded the nation's sovereignty.

"We have expressed our intense dissatisfaction to the company and demanded that it amend the error immediately," she said.

The company later made corrections to the mapping system, she said.

In the newly amended version of the application, all references to Taiwan as a province of China have been removed.