Prosecutors on Monday requested an arrest warrant for former President Lee Myung-bak, who is suspected of 20 criminal charges including bribery, embezzlement and power abuse.

The former president, who was in office from 2008 to 2013, is also viewed as the real owner of auto parts maker DAS, which has been involved in several irregularities, such as creating a slush fund totaling some 30 billion won. 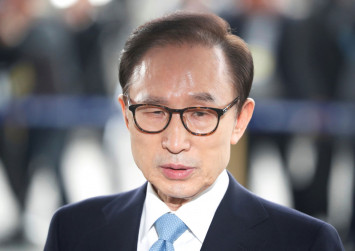 In a 21-hour-long interrogation session that started Wednesday, Lee flatly denied his involvement in the wrongdoings, saying he was not aware of the incidents and that testimonies and evidence gathered by the prosecution have been fabricated.

If an arrest warrant is issued, it would be the first time that two former presidents are in detention, with Lee's successor currently standing trial behind bars.

Ousted President Park Geun-hye was arrested on March 31 last year, 10 days after she was questioned by the prosecution over a massive influence-peddling scandal that led to her impeachment.

Lee was the fifth former president to be questioned by the prosecution.

Lee admitted to receiving $100,000 from the state spy agency, which appears to have gone to his wife Kim Yoon-ok, but refused to reveal how the money was used.

The prosecution has reportedly been looking into a fresh allegation that Lee received illicit funds from a Buddhist monk in exchange for solicitation.

Before the presidential election in December 2007, Lee allegedly obtained 200 million won from chief monk Jikwang, who sought for Lee's influence in establishing a Buddhist university.

His close aide Kim Paik-joon, who is currently standing trial over bribery linked to Lee, testified he received the illicit fund on behalf of Lee, and that the monk also appears to have admitted to his wrongdoing.

Prosecutors are also considering summoning Lee's wife, Kim Yoon-ok, as they suspect she received illegal funds worth 500 million won from a former chief of a bank, and embezzled 400 million won via a DAS corporate credit card for her private use.