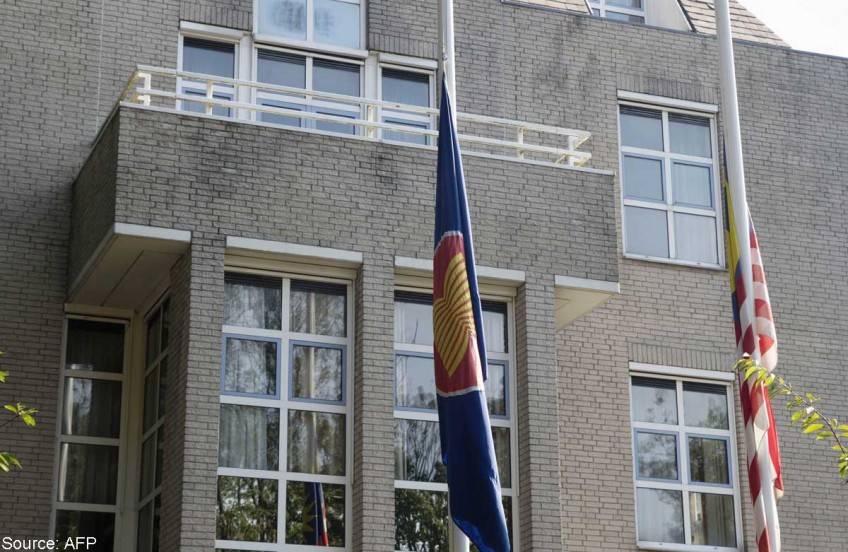 A Malaysian national flag (R) and an Asean (Association of Southeast Asian Nations) fly at half mast on the Malaysian embassy in The Hague, on July 18, 2014, after a Malaysia Airlines Boeing 777 carrying 298 people, mostly Dutch citizens, that departed from Amsterdam to Kuala Lumpur crashed in the Ukraine near the Russian border.

The Association of Southeast Asian Nations has condemned the downing of Malaysian Airlines flight MH17 in eastern Ukraine and called for an independent investigation into the catastrophe.

In a statement from ASEAN foreign ministers issued on the weekend, the grouping expressed its shock over the disaster that killed 298 passengers and crew when it was hit by a missile while en route from Amsterdam to Kuala Lumpur.

There is as yet no definitive proof on who fired the missile but the Ukraine government has accused the pro-Moscow militia of using a Russian-supplied Buk system to down the jet after mistakenly believing it to be a Ukrainian military transport plane.

MH17 was flying over non-restricted airspace and following a flight path which had been declared safe by the International Civil Aviation Organisation, ASEAN said in the statement. That was a flight route utilised by many international airlines flying the Asia-Europe route, it said.

"ASEAN members underline that it is imperative that we find out precisely what happened to flight MH 17," it said.

"We call for a full, independent and transparent investigation into the catastrophe. We emphasise that the investigation must not be hindered."

ASEAN, which includes Malaysia, conveyed profound sorrow and passed on its condolences to the families and loved ones of those on board MH17.

The downed plane is the second tragedy to befall Malaysia Airlines this year following the disappearance of flight MH370 in March.